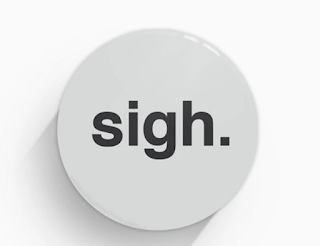 The weird thing about going through a major health crisis in the middle of a pandemic is that there's now constant competition for your usual existential crisis, general misgivings, and small-game worries (not to be confused with large-game worries, better known as adversity, but we'll get to those).

It's not so much that the health thing isn't really scary. It is. In fact, it can still have you sitting on the bathroom floor, after relocating from the bedroom floor, to ugly-cry buckets before feeling exhausted and dehydrated then crawling back into bed with your misery.

It's just, once you make it through the initial shock of another fucking health concern to work through, you're kind of back to square one in terms of constant, low-level, high-functioning anxiety. Except, with the pandemic, that level is now a solid medium-grade with flickers of code red, depending on how much you watch the news.

As hard as it is, try to think back to events before the pandemic. A single nasty event specifically, if you can. We all know that negative stuff sticks better than positive, so it shouldn't be too hard, but give it a crack.

Now this isn't going to be pleasant, but that's the point; really think about that event. Did you lose your job, did someone pass away, did something happen to your home? Think about how you felt at the time, the things you said, the way you acted. As dreadful as this is, I promise it's going somewhere, so bear with me a bit longer.

Ok, now that feeling is buzzing uneasily, put a pin in it. Just for a moment. Now think of an event that happened during the pandemic that was similar in consequence. Unless you have really rubbish luck, hopefully it's not the exact same thing, but something comparable. Here's the really hard part; try to also suspend your feelings about the pandemic and covid. Just for a minute.

Again, I know this is weird, but it is going somewhere. And for those of you who reckon you've made it through the last few years, 2020 included, with nary a stray flat tyre on a dark road late at night, well done you. Either that, or liar liar, pants on fire. Back to the shitty life events.

Think about this second event the same way as the first. How did you feel, what did you say, what did you do? Barring obvious differences, did the two events feel similar, or did the second feel worse? And if it did, let the obvious - pandemic - bias slide back in. Then question if the second one felt worse because of the pandemic, or not.

Here's the thing about shitty stuff; it sticks. Remember what I said earlier about negative and positive stuff? It's called the negativity bias, and before you go hunting down the rabbit hole of trying to understand it, let's just say (very) basically that it means humans are predisposed and wired to reflect more on negative than positive things, even if the positive has more overall effect than the negative.

Yea, I know, what a fucking mess we are. Anyway.

Unfortunately, this means most bad things that happens to us can actually make us feel worse later than the actual event. Don't misunderstand me here, an event is still horrible and awful and traumatising.

But the sticky part is that after the fact, we can sometimes feel worse, recall it as worse, and generally believe it had a greater impact reach than it perhaps did at the time of the actual occurrence.

Yea, I'm aware. This is some messed-up, mind-blowing stuff. But trust me, I looked into it. It's wild. In a creepy way.

Not all events pan out this way, and not all recall follows the pattern. But, by and large, this is the hardwiring humans have, and we can all fall prey to it if we're not careful.

We'll come back to that last bit in a second.

Back at the Mexican standoff that is the comparison between a shitty event years ago and a shitty event in the last year, it might occur to you to consider the mitigating factors surrounding both these calamities. Let's choose some examples, because who doesn't like to be drawn a picture.

A few years ago, you quit your job because of a horrible boss. Like, really horrible; demeaning, dismissive, emotionally stunted. You'd been putting up with their bs for months and months, openly trying to find a way to work with them and be the better, more evolved person, but it just wasn't happening. So you quit.

Last year, your beloved pet passed away. You'd had them since they were a baby, they'd grown and learned with you, you'd become more than owner and pet, you'd become companions. And then there was an accident they couldn't recover from, and you had to make a heartbreaking decision.

Try to inject a little more emotion into these things - we haven't got the wordcount for me to go into the emotional depths required, but I'm sure you all get the idea.

What would make these things worse? Surrounding circumstances obviously, so let's make it interesting (again, in a creepy, clinical way); these events could have happened at the same time. You had to quit your job because of all the bs, while your beloved pet was ill, then it passed away. You stayed home from your horrible job to take care of your sick pet, decided to quit because the bs was too much, and then your pet died.

Let's stop before it gets too convoluted, but you're following along, right? Obviously you know what comes next then. You got it; COVID-19.

Usually, we have some general guideline with which to deal with life's trials and tribulations. We've had a similar experience, someone we know has gone through a situation, we've seen and heard and even been partly involved in stuff. Not so much with covid.

Less convoluted to understand but certainly stickier, your anxiety has no baseline for a global pandemic. It can't rationalise the gut wrenching fear of going into lockdown, or being away from your loved ones. It can't apply logic to a world where shaking hands could mean ending up in the ICU ward of a hospital. And it certainly can't reasonably reconcile over 2 million people dying from what amounts to a zombie version of the flu. No one has any experience even close to related.

Unless you work in virology or have spent significant time in the Congo (home of the virus that spawned a bunch of scary movies), no one has a baseline experience for this. Even people who have say this is the scariest thing they've seen in years. And these people watch bacteria eat human flesh.

Something to think about.

Hence, we come back to a health crisis, general worries, and captain anxiety (sorry, got carried away there). And the pandemic. Always the pandemic.

But that's the point we've come around to; the pandemic affects everything. It's on the news every day, it's on our streets, in our homes. All day, every day. And we can't escape it. Not right now, not yet.

So here's something to keep in mind when the next shitty happens - because it will, that's how life works - the pandemic is still happening. I know we're all trying not to relate everything to covid, but I'm taking a slightly different view, just for this.

When that thing happens, when things come crashing down around you, absolutely feel like hell, scream and rage at the world. Throw things, cry, make some slightly destructive life choices. But also, take a breath and give yourself a break, just long enough to check whether the shitometer is just that much higher because the greater world has gone to hell in a handbasket and still hasn't quite gained equilibrium yet.

Give yourself a moment to wonder if you could change jobs and feel little more confident and a little less insecure if the unemployment rate wasn't a record high. Because of the pandemic.

Pat your little furbaby and wonder if their loss wouldn't be so hard if you could spend time with other people's furbabies. Except for the pandemic and house rules.

Sit with your doctor, try to be calm, and discuss options like any other health scare, but speak a little louder to be heard through the mask. Because - you got it - global pandemic.

Be kind to yourself. Be kind to your anxiety gremlins, your depression demons, your panic monsters (soz, happened again, but the idea stands). Be kind, give yourself a break, moreso than usual. Because we are still here, the pandemic is still on, and we've got a way to go yet.

You need to get up off the metaphorical (or physical) floor, dust yourself off, let yourself be sad, but temper it with understanding for your feelings.

If nothing else, you're ruining all the good work of constant hand sanitising.

Posted by LotusBlade at 16:22 No comments: