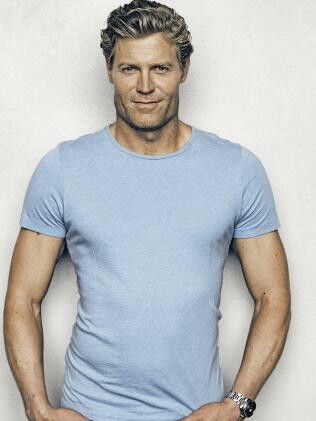 To be clear, this story is happening during the pandemic, but it isn't about the pandemic. I'm pretty sure I could be having this kind of, umm, episode, shall we say, any time, global virus aside.

Now that we've got that sorted, let me tell you about me and Mr Brown...

A few months ago, I started a pretty exciting relationship. I originally met him on set for a production about celebrities in the jungle (not the show you're thinking of*). He was a co-presenter and I was working with the production crew.

We just hit it off. He was charming and lovely, and not at all like the prima donnas you usually work with. I was all business and that seemed to really appeal to him; somehow I managed to get my day job done whilst also being a total flirt (no one is surprised).

Once the show was over, I headed back home and he stayed on for a while. He's a vet you see, and was doing some animal education to bring back with him. It was weird for us both because we wanted to see each other again, also being aware these sorts of relationships can go either way.

Luckily, when he came home about a month later, it was lovely. We thought it would be awkward, but it wasn't; it was sweet and romantic. He turned up at my house with flowers and we sat in the garden and drank gin. After that, we started playing that game of trying to keep things on the down low because he's still pretty celeb, and we're seeing how it goes.

Really, there's only one major issue to our relationship, and for those of you who know me, again, no one will be surprised.

Yes, that's right; it's all in my head. The vet is Dr Chris Brown, and the closest we've ever come is bumping into each other in Bondi Junction about 6 years ago, with him winking and grinning at me when I recognised him.

To be fair, it's not the unhealthiest relationship I've ever had. But also - obvi - not the healthiest. At least I'm seeing this person in my head, and not, say, from their garden window at midnight dressed in a balaclava.

Anyway. It all started with a semi-sexy dream where we shared a steamy kiss. I actually had a similar dream years ago about Simon Baker; nothing overtly sexual, just this really dreamy, gorgeous kiss, and I woke up feeling all moony over him. That 'fling' lasted for ages.

And now, the new guy in my sub-conscious; also blonde, also tall and broad-shouldered, shiny white teeth, surfie looks, an excellent example of the Aussie male. Clearly, my psyche has a type. Which is weird, because in real life I like all types. Am I reading too much Men's Health in my sleep?

Moving on. So me and Dr Chris. I've always had a soft spot for him. How could you not? He ticks all the boxes; well-kept, well-dressed, well-educated, cares about people, cares about animals more, advocates on a variety of topics, is nice to his co-workers, the list goes on.

The worst that could be said of him is that perhaps he's a little vanilla, a little boring. Apparently, his worst secret is that he got done for malicious damage as a teenager mucking about with his mates and damaging an outdoor movie theatre sign. Yea, sorry Doc, we've all been done for some sort of mischief, you're not special. Vanilla AF really.

And apart from his apparent, slight preference of cats over dogs, and his appalling habit of wearing loafers with no socks (and worse *shudder* boat shoes), there doesn't seem much more to him than what you see is what you get. Which is refreshing, and he's definitely up there on the mental lust-list, it's just not exactly the be-all and end-all in terms of thrills and excitement.

So, what's the deal? Why am I sub-consciously hung up on a straight-up guy who happens to be a tv vet with a Colgate smile? Maybe that's exactly the thing; he's A-grade, straight as an arrow. There's nothing subversive or weird about him, he isn't going to randomly pull out some off-the-wall crazy I didn't know he had, he's exactly what it says on the box. And when everyone you meet right now has the possibility of spouting all sorts of nonsense in times like these, maybe that's much more internally appealing than I thought.

Which is probably why I've been 'dating' him for months now. In my dreams. Literally.

Reasonably, after the first one, I didn't think much of it other than what a nice interlude it was. The second tickled my fancy for the coincidence, the third made me consider if eating cheese before bed was such a good idea*.

But the interludes have continued. Not with any regularity or schedule, but often enough to call it a pattern. In that case, what the hell; let's call it a relationship. It's not functional, has unclear prospects, and is entirely reliant on my ability to one-sidedly sustain it.

Therefore, under the circumstances, I'm keeping it rolling. I mean, why not? There's no agreement in place, no money has changed hands, he hasn't met my family. It's win-win, and all in my favour.

Plus, let's be honest, I'm sure things are all good and well for him with Brooke Meredith right now, but at least in my head, he eventually decides on his own to stop wearing those fucking shoes and buy a dog.

*Ok, probably almost exactly the show you're thinking of, but it's my story, so shut up

*It's a brilliant idea. Weirdest dreams you'll ever have but staves off midnight munchies. Balance people, balance.