[ lust in the time of corona ] 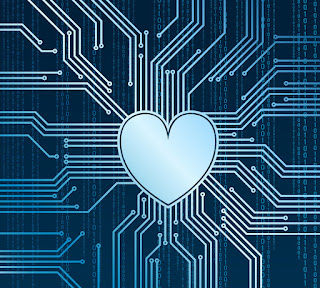 It's all about COVID-19 coronavirus at the moment. I'd love to tell you I had something else to talk about, but I'm working from home, watching Netflix and 'watching' memes, so my repertoire is a little light these days.

One curious little nugget that's starting to pop up though is how dating will work, especially online dating. And here, my friends, is where I shine.

Because, let's be serious; we all know I was hoarding before it became a thing, avoiding people before the government mandated it, and dating like a hybrid Bridget Jones and Taylor Swift.

Y'all ready for this?

For starters, THANK THE EVERLOVING GODS FOR SMALL TALK. I know what you're thinking; wtf? That is literally the last thing you want to be doing during this cluster of a situation. But hear me out.

When you meet someone new, online or otherwise, you basically want them to grab your attention straight up, give you a little mental thrill of pique. In normal situations, you'd put up with all manner of utter tosh first in order to get to the meaty goodness of a chat. The hopes/wishes/dreams part. The who-I-really-am part. The part you actually care about and start paying attention to.

With the arrival of corona, all that fuckwittery has to go. No longer is how's your day? going to cut it, the standard is going to be better and the stakes higher. Because boy, trust me; you're not the only one she's talking to, and they sure as hell aren't wasting their time on bullshit pleasantries about the weather or what she's wearing. 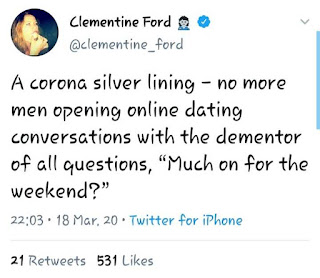 You know what else is going to happen more often? Best behaviour. And I have to be honest, I'm suuuch a big fan of best behaviour, but for very conflicting reasons. You see, best behaviour can mean two things. One, you're being the really good version of yourself, as much as possible, and that version is pretty great. So much so that the rest of you, however much you find it wanting, is actually still pretty attractive to others.

Two, and on the other hand, can also mean you're hiding your a-bit-rubbish side. You know, the one who says rude things, eats with their mouth open, and doesn't shower enough. And this is where things get interesting.

When you're dating someone in person, best behaviour lasts for approximately however long it takes for someone to fall head-over-teakettle for you, at which point, all dem flaws come tumbling out, as it were.

You start leaving the toilet seat up, or make-up all over the sink. You start drinking milk from the carton or talking trash about his friends. You admit you didn't take SARS or swine-flu seriously, so you can't understand all the fuss around corona. It's hard to stop once it starts; we're all human, and there's only so long we can hide what we really are.

Well, guess what, lovers? Y'all in for a bumpy ride! Because now you have to be on best behaviour day after day after day. For weeks. You gotta keep your game face on and on and on, while the other person decides if they believe your little stage show, or they overpaid for their tickets.

And now we're all in iso, that means you have to pull out all the stops in cyberspace. But don't think that means you can be complacent, it actually means the opposite; whereas the online lure used to be enough to reel them in hurriedly for the face-to-face, no one wants to get close enough to find out anytime soon, despite not being allowed to anyway.

Therefore; best behaviour. A degree in artistry will now need to be employed. And you'll either need stamina or to actually be a good person. Because he's not meeting you at a club at 2am anymore sweetheart - he's snuggled up at home on a videocam with a girl who's teaching him to cook ratatouille while singing charmingly off-key in French. 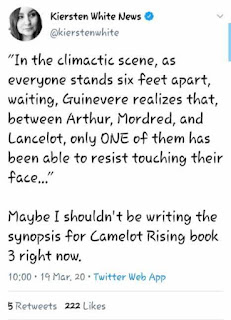 If you've made it past the initial play, i.e. the first couple of weeks or so - ok, let's be honest, it's closer to a month - then double thumbs-up to you! You've essentially made second base without having to leave the house, spend a fortune, or go anywhere ridiculous - how is this not awesome, right?!

Again, remember, dating, like everything else is going to get weird and unusual and we have no choice but to get on with it (except this will be funnier of course). So, should you ever want to see third base again, let alone a home run, you've got to remember that this isn't all going to end tomorrow (or even next week), and act accordingly.

Now is not the time to get half-cut on cheap plonk, whip out your 300-strong POP! Vinyl collection and introduce your date via videochat to each and every one. By character and actor name.

Now is not the time to stop wearing nice clothes (upper body only obvi) and start treating video-dates like a gym class, where you get in, work up a sweat, and slip out. Best behaviour, remember? 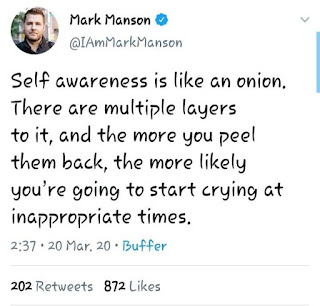 Now, in fact, is the time to pull out the big guns. Time to start showcasing all your awesome, sexy things (not that yet, get out of the gutter). Special things, things that make you unique and groovy, not weird, creepy things, that make you, well, weird and creepy. Remember the chick who sings and cooks? Think like that; think hidden talents, not hidden habits.

Got a secret flair for card tricks? Yes, my man, crack them out! Able to braid hair like a Disney princess? Yaaas, queen, turn on the videocam, toot sweet!

This is the part of the 'relationship' where things get juicy (again, not like that). We still get to spend time doing cool stuff, fun stuff, stuff we usually make an effort to do when we're dating someone in the real world. We're just not going to get to do it in person. Not any time soon anyway.

So, you've got to put in the extra effort here, be creative, think outside the box. Make. Shit. Up. In a good way, obviously. 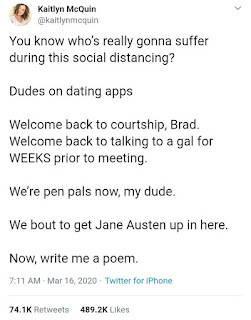 Look, unless you're an idiot, looking to risk your health, your families, and practically anyone else's, we need to make peace with the fact that no one (no one smart, anyway) is getting laid anytime soon. Which isn't all bad really! The last time I had casual sex I ended up in emergency with a roaring UTI, a headache, 3 days off work, and a massive case of irritation. Good times.

As far as I'm concerned, coronavirus might be the best thing to happen to the dating world since Bumble added a video chat option. So, strap in, brush your hair, fire up the laptop, and start getting creative.

And maybe brush up on those poetry skills.