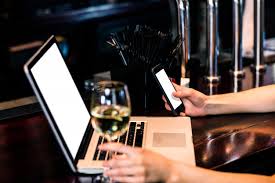 It's been well over five years since I voluntarily set foot in any venue that could be summarised as a 'club'; I wear heels only to work or events I can sit down at, my bare-skin-to-covered ratio is strictly 30/70 (as opposed to the 50/50 of my twenties), and I won't even stay in a café where the barista can't hear my order the first time, let alone a bar. Added to that, I now do my best drinking between the hours of 1pm and 7pm, as opposed to the am versions of same.

But as much as I'm sliding comfortably and gracefully towards my forties, it appears I'm still partying nearly as much as I used to - just in a more socially acceptable fashion. Now, instead of bar hopping, I group hop. Online, with phone in one hand and a drink in the other. If I'm feeling especially motivated, I'll pull out my laptop.

Yes friends, I now conduct my bad behaviour online. I'm a member of no less than half a dozen Facebook groups, Instagram DM chats, and even a public Twitter war. And that's not including the other random online social pages I'm a part of.

To be fair, I kind of fell into it, much like any other social occasion over the age of thirty. You know the ones; you rock up, feel awkward, drink too much, and make a mild fool of yourself (also possible sans booze, by the way), and generally feel alright about it the next day because, well, you're over 30 and very little fazes you anymore.

Quite apart from the other fact that with such things you always end up wondering why you shaved your legs for this, the massive appeal of online groups, even with special 'events', is the distinct lack of pants required. Seriously, I cannot tell you the amount of occasions I've been able to just put on a nice blouse, slap on some lippy, and not even bothered to change out of my trackies. Bliss.

At first, I didn't even notice people were drinking. I sat down to get into a robust esoteric discussion about the difficulty in exchanging northern hemisphere standards for Australian practises, when the convener announced she needed to nip to the kitchen to refill her wine. I nearly fell off my comfy, cushioned lounge chair. It was 3 in the afternoon. How indulgent!

While I was initially suspicious of getting day drunk and being online (not day drinking per se, quite love that, just the slightly dubious combo of getting loose and being loosed in cyberland without supervision), I discovered all sorts of benefits to such an arrangement.

Firstly, and I say with relish again, the lack of a dress code. Maybe I've become weird with age, but I suspect it's only half that and half laziness; I cannot fathom putting on a bra for less than a full dinner, 3 margaritas, and a less than 10 minute cab ride home. And I'd love to tell you that a hot date makes me quiver with anticipation, but I'm afraid not, lovelies. The only thing that makes me quiver with anything even close to excitement these days is a well made cheese platter paired with a good pinot. In my own home. At 5pm.

The other big enticement to online socialising is the exclusivity factor. Remember the thrill of rocking up to a club at 10pm, dressed in next-to-nothing in sub-zero temperatures, the bouncer eyeing you up then ushering you solicitously inside with leery approval, past all the other losers, also dressed in next to nothing ?

Anyway. Now you can feel the superior glow of exclusivity - without leaving the comfort of your own home. Eh voila! You are now in with the cool crowd, and you didn't even have to show your boobs to anyone! Although, should you feel so inclined, you are now free and welcome to do so. Online exclusivity is a benefit! You can now make an absolute tit of yourself in a safe(ish) environment!

Finally, there's the packing it in activities that no one relishes; blinking blearily at your seventh drink and realising it's time to call it a night, stumbling out to the street for a cab, paying an absolute mint to get home because you somehow pub crawled into the city, plus the inevitable debacle of trying to undress, remove make up, and the general half-assed attempt to hydrate before invariably crawling into bed, half-clothed, smeared in mascara, and a great deal more than half-cut.

Let me outline an online night out (or rather, in) ; dressing up takes half the time as you're only doing half your body - no one films their lower half (it's not that kinda show folks). Transporting from the bedroom to your laptop takes less time than it did for me to write this sentence. Ditto the walk to the drinks cabinet and the fridge. Dinner was microwaved or delivered. No one lined up or spent 20 minutes trying to find a good table. No one raised their voice above 60 decibels to get each others attention (the PC mic did all the work for you, and besides, this group are much too polite for that kind of rudeness), and you didn't miss half the conversation, come in at the wrong point, and make a fool of yourself.

In fact, the only time you briefly experienced a moment of awkwardness was when you quietly chimed in at 8.45 that you were calling it a night, as you'd had 3 drinks already and had to be up 7am to go to Pilates. Except, hang on, you didn't; Karen from up north replied with thank god, me too!, Dave was delighted as he had a 5am postie run, and Dee and Naomi were both doing their kids sports carnivals the next day and were already dreading the mild hangover that half a bottle of cheap plonk was likely to bring with it.

See folks, after the age of 35, it's a whole new ball game. No longer the need to prove yourself with marathon drinking sessions, all night pub crawls, and your ability to power through a hangover the next day without puking, now there are new standards...

Who's wifi has the best overall coverage. What sort of comfy leisurewear did you score at Kmart. Can you time the oven / pizza delivery / uber eats to coincide with the intermission break. Can you balance same on the lounge with the reading material for tonight's session. And finally, multi-tasking priorities; eat and talk, talk and type, drink / eat / type / talk - which one works for you.

So, for those of you still at an age where the thought of the hottest new DJ spinning tracks from 11pm until the wee hours of the dawn is enticing, you can keep your hip new clubs for yourself. If you think a night out involves some sushi on the way into the city rather than a full plate of carbs, by all means, carry on. And if, this one being the most baffling, you are quite unruffled by basically throwing 50-dollar bills at cab drivers - by all means, be my guest. It's your money, after all.

However. Me and my peeps will tucked up in our Kmart trackies, our NYX lipstick with matching eyeliner, and waiting for our hot, home-delivered chicken roast and veggies with a large one - that we didn't have to yell like we were at State of Origin to obtain (Fancy a G&T? Why yes, you making? Yes, yes I am! Jolly good).

You can keep your noisy clubs, your dress codes and overpriced drinks, your lack of a good feed, and anything even resembling a relaxing place to sit. The rest of us will sail through to our forties comfortable, acceptably tipsy, well-fed and generally still solvent in the morning.

Posted by LotusBlade at 10:29 No comments: