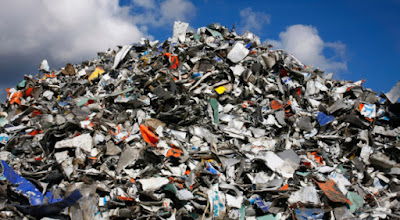 Of the many things I'm obsessed with, I have a small, fairly innocuous fixation with KeepCups.

On the whole, it's a reasonably healthy preoccupation, and much less disastrous than previous ones. In fact, it's pretty constructive if you think about it, and helps in some small way to save the planet.

For those of you still in the dark, keep cups are reusable travel mugs that come in a variety of shapes, sizes, colours, and now with an assortment of printed logos and themes.

Yours truly has a modest but varied collection, built over years. There's the blue and green one that lives in my car, the Star Wars RD-D2 one that sits on my desk at work, and the collapsible orange one from Port Arthur I have at home. Most recently, I've acquired a Bury Me Standing branded one, from my favourite coffee and bagel place in Hobart, that travels to work with me in the mornings.

As an aside, I've just found out Bunnings are now selling their own branded version. Much. Excite!

Anyway, you might be wondering why all the fuss over a simple cup? As in, many things hold liquid, what's so special about this receptacle?

(Sorry. I've been going really hard on Dictonary.com's Word of The Day)

It's no secret I'm a bit of a greenie and think we could all do more to help save the environment, so before you throw up your hands in disgust and write this off as another hippie rant, hear me out...

I'm not going to ask you to read boring statistics or show you pictures of dead whales. I'm not going to lecture you on climate change or list how many species have gone on the endangered list in the last decade due to same (seriously though, it's scary how many are on there).

What I am going to do is ask you to bring it down to your own little microcosm, and reflect. That's all. It's a simple exercise that can lead to simple changes, that can then translate to small differences.

But let's not get ahead of ourselves. Back to the cups.

With this realisation came the conclusion that I'd be drinking a fair amount of the liquid gold over my lifetime, and a modest *cough* mildly uncontrollable *cough* passion for novelty mugs began.

Sometime in the '90's I found my first travel mug, and was able to combine my love of caffeine with an unnamed desire to keep my existence ethically sustainable. Hurrah!

In my late twenties, I did a small calculation; every week of every month, for over a decade, I'd drunk 3-4 cups of coffee. For simplicity's sake, I rounded up to 4 cups, and specifically over 10 years.

That's 30kg of purely liquid-holding waste I put into the environment. Just by drinking 236ml of fluid every few days. Imagine if I did what some people do and drank 4 cups a day. That would be say, 16 cups a week, 832 a year. 116.48kg of coffee cup waste a year. And that's just one person.

I'll let you think about that  for a moment, and we can talk about something else...

Way before it was cool, my mother was carrying reusable grocery bags. She'd have two or three of those cheesecloth cottony ones in her hangbag at all times. In later years, when the fashion really started to get going, she got into the printed varieties and their thicker weave, semi-synthetic cousins that last for simply ages, and can be washed at will.

Mum was crushing it being an ethically and socially responsible, carbon-footprint aware being eons before Woolworths did this and Coles followed suit not long after. And she certainly wasn't the only one.

Which made this seem the height of stupidity to me. If you thought Pauline Hanson was the queen of backflips, you hadn't seen nothin' yet... 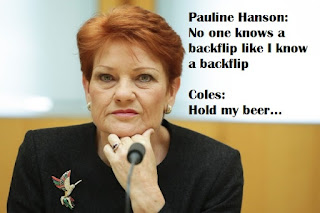 What made this super ridiculous to me was simple, and to understand that, let's bring it back down to the microcosm, so we can all realistically reflect.

Like most people, we use the occasional single-use plastic bag in our house. As waste-basket liners, to carry lunch in, to wrap up crockery so it doesn't break in storage. If possible, we use them 3-4 times, and try not to get any more when out shopping. We've been doing this for years.

You know what else we've been doing for years? Prepping for the end of single-use plastic bags. Swapping out the plastics for reusables, stocking up on natural fibre ones, brushing off the nana-trolley (bloody love that thing).

So did a lot of friends and loved ones. So did neighbours, and random strangers whose nana-trolley you admired at the shops (they also come in funky styles and colours now).

But apparently, the other half of Australia went a little batshit, and started assaulting checkout tellers, like they had anything to do with the bag situation at all.

I hate to break it to you Oz, but you need to lower your caffeine dosage, 'cause that's just crazypants. And you know why?

Because we all became aware of 'climate change' with Al Gore's An Inconvenient Truth in 2006.

Because the first big businesses who got involved in plastic bag bans happened in Tasmania in 2003.

Because the term 'carbon footprint' was coined by Professor William Rees in 1992, and quickly reached common vernacular soon after.

And because the first mention of sustainability, or 'sustainable development', was used in a report by the United Nations in 1987.

What I'm saying, if you haven't already caught on, is that all those people who claim they hadn't been given enough warning about the impending bag situation, are lying through their shiny white veneers. And using that as an excuse for shitty behaviour is really quite abhorrent, but also, it makes you look insensitive and foolish.

When did we, as a nation, become so involved in ourselves, our personal needs, that we forgot about the planet we live on, the air we breathe, or even just the resources we use every day?  Surely, surely, no one was under the impression it would all last forever??

(That was rhetorical. If you actually thought the resources of this planet were supportable at the current rate humanity is going through them, please stop breathing the same air as me and go away)

Anyway. To be fair, not everyone understands how quickly we are using up natural assets and how we might go about replenishing them. Fair enough really; no one wants to get a degree in biochemistry or clinical research, and then specialise in native resources.

Firstly, it's hard, and secondly, it's boring. Especially if you have to study it for six years.

That being said, everyone could do with a little more learning in common sense, but no one wants to do that either. Even though it's cheaper and it will 100% help you and this planet live longer. Oh well...

Here's the thing; saving our planet isn't hard. But no one - i.e. big business - wants to do too much about it because it doesn't make any money. If you think that sounds conspiracy theory, it is. But not in a secret society, action thriller, government cover-up sort of way. It's much more mundane than that, and much more ordinary.

You see, because it doesn't make money, government and big business are crafty in how they deal with this, you've got to give them that. They distract us with the newest, shiniest things which, as the consumerist culture that we are, we love - and totally get immersed in.

And then we forget all about that pesky bag situation. And the landfill problem. The fact that China will no longer accept the lions share of our waste and we now have a disposal problem.

We gloss over those things by assuring ourselves we are doing our bit in eating organic or throwing our non-biodegradable coffee cups in a recycle bin or buying 100% natural fibres, and calling it altruism.

Don't mistake me here; these are still partially helpful things. But they are a bandaid solution to a endemic problem.

What I'm saying is this; these actions are much like shutting the gate after the horse has bolted. Where once they may have assisted to stem the tide somewhat, industry is so far gone that we need to be a little more rigorous in our approach, a little more savvy, a little more circumspect in our choices.

Let's be clear here; no one is asking you to join Greenpeace and start chaining yourself to trees. We're not asking you to hop onto Sea Shepherd and sail the open waters of the Coral Sea. Both are outdoors in the elements and mean many hours of nothing much. Plus hippies are weird.

We're just asking that you step it up a bit in the sustainable department.

Stop getting single-use plastic bags, buy a nana-trolley. Support farmers by eating local - it's already organic, trust me. Take a moment to think about where all the packaging and plastic and other random waste that leaves your house goes.

Look at this way; eventually Gucci will do what Balenciaga did and design something like this, but ethically responsible. That way, you can still be the self-involved, fashion-forward, high maintenance wanker society is accustomed to *and*  help save the environment.