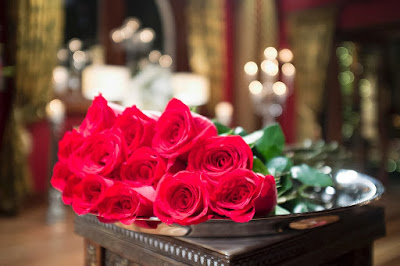 I wasn't going to write this for a number of reasons.

Firstly, while I do, in fact, watch reality tv shows, I try not to let them colour my ideas or experiences too much. Mainly because they are based on fragmented, heavily collated, and frankly biased versions of events, events often portrayed by people who have no idea what they look like to the outside world.

To be fair, why would they? In their world, there are just double the amount of people standing around while they do their thing, half of whom happen to be holding cameras, make-up kits, lighting grips, and what seems like other useless crap.

The second reason is that journalists like James Weir and Isabelle Truman are way funnier than I am, and even Genevieve Rota has a slick recap going. However, this season has presented me with waaaaaay too much ammunition, and we're only a few episodes in!

No, I'm not talking about Masterchef, which is above reproach and I won't hear a word against it. I mean, of course, The Bachelor.

If you're already rolling your eyes, stop reading now - it only gets more gossipy from here. For the rest of you (read = 98%), let's carry on, shall we?

Much like Sophie Monk (whom I know personally*), this season's Bachie is a real person with a real personality and a plethora of adorable dad jokes, rhyming slang phrases, and brilliant one-liners. I mean, of course, the Honey Badger himself, Nick Cummins.

In all honesty, I was a bit vague on who he was when I first heard of him a few years ago. I did recall the football connection, but I certainly couldn't name the code, let alone the team (Union and the Wallabies respectively, for those playing along at home).

However, any man with a great smile and the ability to crack out a metaphor like a stockwhip at any given moment is going to have hearts aflutter. Or maybe that's just me.

Also. Have you seen those abs? *Swooooooooon*!

Nevertheless, it's not just the hilarious side-jokes and snappy remarks. Nick has a genuine and honest nature that conveys itself in pretty much every situation you see him in. He's a very ocker, Aussie bloke and it's hard not to take an instant liking to him, much like we all did with our Sophie.

Which makes this season so tantalising. Barely a week in and half of Australia is already #TeamNick and voting on who they think is good enough for him.

(No one, by the way. None of these bitches deserve even a sideways glance at that magnificent mo. Just saying)

Anyway. The dynamics of the Bachelor Mansion are always a little intriguing at any rate; you've just stuffed 24 agile young things into a house together and told them to compete to be the last one standing. Only the strongest remain, and even then, there's no guarantee of the prize. You could leave the dubious safety of the competition, having given up your whole life and have it come to nothing, and no one, returning to a world completely changed by your experience on the inside. And people volunteer to be tributes for this! Knowing they may not survive...

Oops. Sorry. Wrong show. Back to the mansion.

As much as it pains me to say this, and though still rife with drama, The Bachelorette and a house full of testosterone-charged lads still presented much less spite than the same but opposite, and a gaggle of femme-fatales.

With the gents, you got enough posturing to make a peacock feel inadequate, and a level of bullshitting my brothers would be proud of - and they can talk nonsense with the best of them.

The Bachelor seems to bring out the cattiest of lasses Oz has to offer, and make you wonder if high school ever really ended. Or if it just follows you everywhere, hiding in the bushes like a stalker, waiting to pounce and expose it's, well, ugly bits.

There's Cat, who states she's 'from Bali' despite the glaring fact of how white she is, and Alisha, who just will. Not. Shut. Up. Maybe she thinks she's on the wrong show? Did they hire a narrator and the producers got confused when she showed up in a ball gown?

Then we have Romy, who completes the mean girls trip with the above, and manages to convince all the girls that a random slobber on Nick's neck was a 'very romantic' and 'not tacky or forced' ' kiss'.

Hon, we're I'm from that's called something else, it bears no resemblance to what you're calling a kiss. Just quietly.

Except with Vanessa, it's that there is no sunshine. I've seen better temperaments on pissed-off Pomeranians. She never laughs, never says more than 6 words, and I'm pretty sure her facial muscles aren't programmed to do that upward tilt thing that most of us know as a smile. Or maybe she has, and I just had flashbacks to Jaws and blanked it out...

Anyway. To be fair, they're not all complete harpies. There's the pint-sized Brooke, an instant favourite. She's a youth worker from WA, who also deals in mental health issues. For a 24 year old, there's a maturity combined with a sense of fun that's quite refreshing.

Brittany, born on the same day in the same town at the same hospital - nice little bit of serendipity there - also seems to have a lovely natural vibe about her, and comes in close as a favourite with Brooke.

And Cass. Darling, sweet, fragile Cass. She met the Bachie a while back, they dated for about twelve seconds, and nothing came of it. Or so we believe.

However, in Cass-land, we've stumbled on the ultimate kismet, and a situation that means they were meant to be... meeting again on a show with a horde of other women, also competing for Nick's affections. Nevermind it previously didn't work out in the real world, where there's much less pressure than being trapped in a mansion for 6 weeks, living purely off champagne and resentment...

That being said, you've got to give the girl a break. We've all been there; heed-over-heels for someone who barely registers our presence, clinging to the possibility that it might all come together again.

In any other situation, you'd drag her out for dinner and drinks and lay it all out, help her forget what's-his-name and find a way to move on.

But this isn't the real world and these wenches aren't here to make friends; they're here to win. So sadly, we're left to watch Cass' freewheeling emotional rollercoaster, and quietly beg the gods she gets kicked off soon, for her sake more than ours.

But finally, we come to the real star of the show, the reason we all tune in every season, the drawcard that seduces us year after year. That hair, those eyes, that smile, his way with roses and maths...

The perfect man in every way, his hair gives David Tennant a run for his money, and season after season we are treated to his distinctive, inimitable wardrobe; variously tailored suits to the ultimate in grandad cardigans.

He's funny, he's cheeky, and damn, has he got swagger. Osh is well in on the joke that Channel 10 have created an entire show based on people trying to get laid. But he also genuinely cares about the contestants as well as the Bachelor/ettes, and adds a marvellous positive and even-tempered element to the ordered chaos of the show.

All things being equal, we wish we could all have our own personal Osher, standing by before romantic interludes, gently murmuring encouragement, holding out the requisite cheese platter and red rose, congratulating or commiserating as required.

Apparently though, this is not how you make ratings.

So, in the meantime, we're left with some buff beefcake and a gaggle of pissed-off swans - ehem! - women, looking for love, a real connection, and the key to the mini bar.

Pass me a cracker and some more bubbly, will you?

*read = I helped her break into her car with coat hangar one time in the '90's when we lived on the same street and I found her crying outside it in her pajamas one morning at 7am. That counts as a real connection. Right?

Posted by LotusBlade at 15:30 No comments: