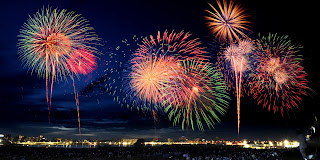 At the end of seventeenth year of the twenty-first century, we all looked back and reflected, musing on the events of the weeks and months past, on the various situations and circumstances, the predicaments and adventures, wondering what the future held for us all.

Mainly however, we are now taking a long look at the year past, and wondering if possibly we could have asked one simple question a wee bit earlier in the piece. A question that may have avoided some of the larger disasters. A question most other 17 year olds get asked all the time...

Can I see some ID please?

Perhaps if we had been a little more circumspect in our discernment, 2017 may have been less of a clusterfuck. It may have been slightly more dignified, however besmirched by infamy it had been.

To be fair, we do say this every few years when the ridiculousness gets particularly out of hand. That being said, and seeing as the twenty-first century is now entering adulthood, drinking age, and legal status, perhaps some of our more appalling habits could fall by the wayside? Just a suggestion...


I'd like to start with political inanity. Whether it's Turnbull and Shorten, or Trump and, well, anyone, I think we are all pretty over it. Gone are the days of meaningful discussion, in 2017 we focused on unsatisfactory phone calls, lumps of coal, anyone and everyone's citizenship, and pollies being liars (was pretty sure that was in the job description, to be honest...).

Sadly, while we were mindlessly distracted by the above, we somehow swept past Larissa Waters being the first woman to breastfeed in parliament, the same-sex marriage plebiscite (which despite having a decent run-up, seemed to end rather anti-climatically), and our two new favourite villains; Michaela Cash and Sam Dastayari.

To say I'm disappointed is an understatement. I haven't had my brain this mushed since Julia Gillard and Tony Abbot spent the better part of 16 months saying the words 'carbon tax' without anyone actually being sure what they were on about.

Please, if there's any chance our pollies could talk less rubbish and more sense this year, I'm sure the Australian people would be eternally grateful. Sorry America, can't help you with Trump though...

The next thing on my list is Twitter. It's asking a lot of anyone to keep the verbal diarrhoea to a minimum, especially when you have an open platform to spew forth to your hearts' content, but honestly, show a little restraint already.

That's right, I'm looking at you, Donald Trump. Like a small child, you say anything and everything that's on your mind. And not content to leave it at that, you subject the entire world to your drivel.

Between telling Hilary Clinton and Theresa May what to do, taunting Kim Jong-un, and trying to hide your bromance with Russia, I repeat one of my earlier statements; there is an actual clown in the White House and it's all downhill from here.

Should you think this sort of behaviour is restricted to old, white, over-privileged, under-educated, orange twits, there is a runner-up prize for best public foot-in-mouth moment. Take a bow, Yassmin Abdel-Magied.

A well-educated young Muslim woman, with some views I agree with and certainly enjoy hearing her opinion on, she unfortunately joined the ranks of people who need to have their ID checked and their parents called, with this little pearler on ANZAC Day; 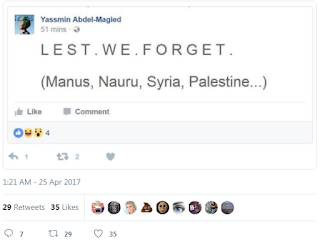 It matters not if you agree or disagree, everyone is welcome to their opinion. Perhaps however, being in the public eye and supposedly an example to young people, one might consider appropriate mediums and timing? Just a suggestion.

My partner plays video games. His hand/eye co-ordination is amazing, and he plays with his dad and brother online. It's rather sweet because they live in different areas but get to spend some quality lads time together. I don't really get into it much myself, but all the games they play appear to have some serious strategy involved, problems to solve, group challenges, and tests of your lateral thinking.

So, for the love of the gods, can someone explain to me why PokemonGO is still a thing?!

Why am I still having grown adults walk into me in the street, or asking me to move my coffee out of the way of the poliwag or mudkip nearby (I did research ok? And no, I didn't enjoy it).

I will *give* John Hanke my firstborn's fine-motor skills if he just invents something else. Anything else. As long as it's indoors and doesn't have humans acting like lemmings.


We survived the cronut, the duffin, the dagel, and coffee receptacles being anything except actual cups (including waffle cones and avocados). We had charcoal lattes, taco/pie/candy pizzas, and pickles on cupcakes. We got over sushi burritos, frose, and trying to stack literally anything into a mason jar and calling it a meal.

How. The Actual. HECK. Are we still eating unicorn food then? Sigh.

Recently, I discovered that Cadbury's Roses had subtly changed their wrappers, as well a few flavours. Ok, ok, I thought, be cool. It can't be that bad. And it wasn't. As much as the Brits went nuts, changing the twisty wrapper and adding Salted Caramel as a flavour felt like a subtle, gentle nudge into evolving confectionery vices. I'm ok with this, I can roll with this.

This is progress. We all have to live with it, and hopefully it's mainly for the better.

From Gaytimes to milkshakes, to lattes and toast (don't ask), everything can now be slathered in rainbows and sprinkled with sparkles. Bagels and burgers, soups and sushi (seriously, you really don't want to know). 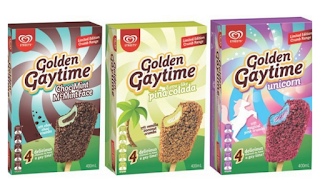 I'm begging you; leave the unicorn craze to dress ups and dolls, headbands and party themes. If you can't identify it - especially though a rainbow haze - you shouldn't be eating it.

It's hard to pick a final gripe for 2017. Between beg-packing and looking at your phone while walking, anti-vaccination and charging for wifi, I kind of lost the will, I really did. So much stupidity, so many people doing it.

Then I recalled a few great things that there could probably be more of in 2018...

Bravery and compassion for our fellow humans
A 30 year old man risked his own life to save others in a horrifying mass shooting in Las Vegas.

Using social media for a laugh and making it a friendlier place
Carter Wilkerson and an epic chicken nugget challenge that is unlikely to be repeated.

Caring for our furry friends as well as our fellow humans
Hurricane Harvey didn't just devastate human lives, it took away others' homes too.

Women being badass and breaking records
That sentence says it all.

There it is folks; things to avoid and things to advance. Surely if we work together, we can lower the dumb and up the maturity. After all, we are the product of 4 billion years of evolution; perhaps we might demonstrate it...

And if not, me and rest of the grown ups are grounding you until you can act your age.