[ The Rise of the Breakfast Biscuit* ] 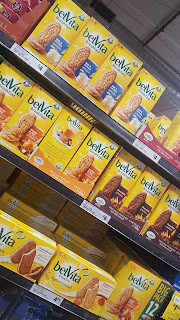 Apparently, we are all so time poor that we need to have our first meal of the day delivered to us in a convenient, processed, hand-held parcel. One we can carry on the bus or train, or even while we're driving (which is ridiculous and dangerous in and of itself, but here we are).

To be fair, conceptually, the original idea had merit; when muesli (or granola) bars were invented in the late 19th century, they were a way for hikers to carry light-weight, nutritious, high-fat snacks good for such activities.

They also quickly became a popular way to get kids to eat more fruit, nuts, and grains; by packing them into a fun, hand-sized rectangle, slathering them in yoghurt or chocolate, and packaging them in bright colours, you had a much more appealing snack than a piece of fruit. Putting aside the high levels of sugar and other preservatives, it was still a success in terms of getting kids to eat regular, reasonably-wholesome nibbles between meals.

Jump forward a few decades, and 'museli bars' today are like the difference between '80's and '00's Stallone; 20 years of steroids and too much time on your hands. Somewhere in that time, things got a little bit weird...

What used to be a grainy bar of goodness is now some sort of hybrid; it looks like something astronauts from the future will eat, and is designed to inject more nutrients, more energy, more stuff, into our busy lives and bodies.

And then we took it on a strange tangent; into the world of the humble biscuit. Suddenly, we are all being encouraged to eat a monstrous, oversized wheat oval, halfway between a muesli bar and a cookie. Except not. At all.

Biscuits are primarily a flour-based product, classified mainly as a type of bread or soft cake, eaten in small, round discs. Generally also considered a dessert snack or confection.

Not, obviously, what nutritionists would have us eat for breakfast.

But because industry likes to treat society like children, the breakfast biscuit was formed as a shiny, convenient, and endlessly tempting way to have a wholesome start to the day. And sadly, we bought it.

Equally sadly, we did not shun the continuing homage to our dying ability as capable adults, able to manage our own sustenance, without being spoon-fed, or rather, teething rusk-fed. As if we were too inept to gather and create a healthy meal. No, we fell all over it like ants on spilled cordial.

But I may have gotten a little carried away here. Over zealous in my dislike of such things perhaps. Except, well, there's the other things...

Leaf blowers are the yard equivalent of pursing your lips and blowing on a house fire. And just as effective. A more useless 'tool' I have not yet encountered.

What appears to be a time saver in terms of cleaning up your yard, just moves the leaves and soil from one place to another. Especially as people appear to think that is all that's required in garden work, now that a piece of machinery has been invented that does half the work for you.

Our townhouse complex has a young lad turn up at 9am every Friday to do just that. He wanders in, turns up the leaf blower to industrial-noise-level, and proceeds to move all the leaves from the walkway into all our courtyards...then he makes like a tree himself, and buggers off.

And yes, that's all he does. There's no sweeping, no collecting of garden waste, nothing. One wonders how much this sort of job pays, but personally, I still like the idea of being employed in a job that requires more skill than a trained monkey.

When did we all become so weak and un-able-bodied that we needed a machine to work for us? When did a bunch of brushes on the end of a stick become so passe, that we abandoned it for a environmental pollutant about as useful as Trump's hairdresser?

Are we so completely devoid of necessary survival skills that this is what we've come to? Have we forgotten all the basic expertise of our ancestors, and handed our lives over to technology and time savers? Apparently so.

It's best not to get me started on mobile phones, social media, and auto-pilot-self-parking cars. I'm confused by this, frankly baffled by this, and completely underwhelmed by this.

In an age where I haven't had to correctly spell the word 'convenience' for at least a decade (dubiously thanking autocorrect here), I feel we might have taken things just a little too far.

Maybe I've watched too many episodes of Black Mirror, maybe the machines won't rise up against us, maybe we will survive after the apocalypse with all our natural aptitude intact...

The point is this; if we're all so busy that we can't put some cereal in a bowl and add milk or juice (it's a thing, shut up), or toast some bread and slather on a spread, or - gods forbid - actually cook something, then sit and eat said prepared meal...

Well, let's be honest, humanity has a lot bigger issues than whether you can handle your breakfast biscuit and watch cat videos at the same time.

*and other appalling 'time savers'.