[ laughing and sleeping - just quietly, you're not doing enough of either ]

Every weekday morning, my alarm goes off at 6am. I'm usually in bed by 9.30 the night before, but wake around 5.30, and rolling over for that extra kip is extra nice.

On Sundays, I used to get up at 7 for archery, but my routine has changed a little so I don't go as often as I'd like. Still, my body wakes me up between 6.40 and 7.20 most of the time anyway.

Saturday is my only sleep-in day. Depending on how my week has gone, what season it is, or whether I have anything on that day, I consider anything past 8.30 pretty great. It's over an hour more than most other days, and even if I do wake, I can lie there dozing and daydreaming without a bother.

Doing the maths, you'd think I was averaging 7-8+ sleep a night, right? Which is quite respectable, and within the daily recommended amount.

Except, I'm not. Literally half my time is run on 4-6 hours a night, large amounts of caffeine, and the ability to work hyper-efficiently on autopilot for a few hours, at least until the caffeine kicks in.

How does that work? Hold that thought for a moment...

My partner tells brilliant dad jokes. My mum has a wicked sense of humour and excellent timing. My brother and I send each other various cheeky memes and videos which basically demonstrate we're siblings through our sense of humour.

Most days, I get a decent laugh out of life. I find badly translated street signs, commuters morning behaviour, and Sydney-siders dress sense hilarious. I like to think of myself as moderately funny, and able to make people crack a smile even in dismal circumstances.

You'd think then that I was getting sufficient doses of chuckles in my life. That I was having enough stress relief - because that's what laughter is - to be pretty chillaxed, correct?

Not so much. I get stressed about traffic, cranky at rude people in transit, and overwhelmed in shopping centres. I find all sorts of large crowds intimidating, tech failing overly frustrating, and teenagers in general annoying.

No, I'm not unwell, I'm just a little anxious and overly serious. But how come? Well, back to the sleeping...

One of my very favourite people used to tell me this old saying. He passed away a few years ago, but I never forgot it, and I think of it a lot these days. 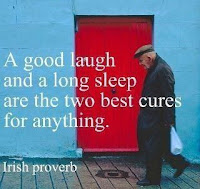 Coming from a people who have known some serious hardship, it's tough not to take this on board and have it sink in. Or if you paraphrase it a bit, there are few things a good laugh and a long sleep can't fix.

Some people would say that obviously laughing and sleeping can't fix everything, and these people are clearly neither laughing or sleeping enough, so we're going to use their pedantic cynicism as the rule example.

If you think I've over-simplified things, then you haven't been listening, and that mindset is part of the issue.

We're constantly trying to find time to relax and stressing ourselves out about finding that time, so we squeeze ourselves into every, little, single hour and minute of every day, desperately trying to make time...to make time.

We sleep less because we think we have less time, but get tired and burned out by having less sleep,  and so crash at unfortunate moments... At which point, we're not really getting quality sleep, per se, our bodies are just pulling the plug because they've had enough of our exhausting nonsense.

One more time, if you think I'm over-simplifying, you haven't been listening. Take it from the pot here, who spent a lot of years calling the kettle a decidedly dark shade of black; not everything in life is simple, but this bit is.

There will be days when you can worry over money. There will be nights you cry over family. Certainly, endless months, maybe years, feeling underappreciated at work or in your social group.

And I don't have all the answers to all those problems. We all have to find our own way in this world, fight our battles and win some wars. Hope for the best and prepare for the worst.

But I do know this; while that's all happening, while we are busy making plans, there are still going to be beers to be drunk, naps to be had, and animal videos to watch.

What I'm saying is this; take a nap at 3 o'clock on a Saturday. Watch rubbish television for five hours on a Tuesday night. Go to work, be productive, follow all your set ideals - but make some room.

Not room in your day, or room in your schedule. Don't force it like a dentist clamp keeping your jaw open for root canal.

Room in your head. Just a little space, enough to fit a dad joke or two, a sneaky nap on the train, or even a silly meme you send to your besties.

To finish off, I'll leave you with a lovely cliche that I always thought should be a mini-motto; from a tiny seed, great things have grown.

Think about it. Maybe after you've watched some Comedy Channel and had a catnap on the lounge...