[ team spririt? what, you mean like a bramble royale*? ] 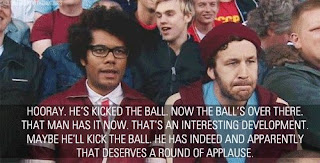 In high school, I didn't really get into team sports. It's not that I wasn't any good, I just wasn't very keen.

As a rule, P.E. enforced the mandatory Wednesday afternoon of dressing in the teenage version of gym gear (dorkier than the grown up version, but not by much), and toddling off to your elected sport for a few hours.

Invariably, I found myself rather adept at certain exercises year after year. Unfortunately, my enthusiasm dipped lower and lower, until, upon reaching years 11 and 12, I discovered we could do things like archery or just take the afternoon off as 'free periods'. Sweet!

Don't get wrong, I nailed it at soccer and hockey; I was never going to be the biggest or strongest, but I was always the fastest, and that was the key. And I certainly enjoyed running around, smashing things, and being good at something.

It's just I could never really get into the competitive side of sports; being better than the other team, pitting myself against my opposite player in the opposing side, revving up for a crushing game to defeat other schools.

Honestly, I had enough energy for my teenage angst, and that was about it.

It's really no surprise then that as an adult, I don't do team sports of any variety. Regrettably, I do occasionally have to encourage others to be interested in such things, and that's where it gets a bit awkward.

As someone who doesn't often engage in common competitive activities, it's hard to display that sort of ambition in the same way as a traditional sport would. So I've had to find other things to compare it to.

I mean, I have encyclopedic knowledge of Osher Gunsberg's wardrobe. I can tell you three different versions of pretty much any childhood fairytale you can name. And, generally, no one has eaten more desserts - nor tasted more flavours of same - than me (Adriano Zumbo and Katherine Sabbath would be so proud).

So, theoretically, I understand and can engage in some healthy rivalry, depending on the topic. And, lest I be mistaken, I like watching sport every now and then (though don't get me started on rugby not being what it was like when I was a kid. No one has time for that). I just can't necessarily activate it on queue.

Let's not; I don't run unless something is chasing me, and I'll choose eating over running any day of the week.

Ooh, weekend cricket is coming up, who's in?

Definitely not me. I'm already pasty without the assistance of cricket whites, and can't imagine something more dull and unhealthy than hours and hours standing around in direct sunlight.

Look, they have competitive frisbee now! That looks so fun!

No, it does not. It looks like an excellent way to encourage a variety of injuries, not least of which would be full-body collision followed by concussion. Considering my already exceptional ability to injure myself with everyday household items, perhaps we might skip the addition of running, looking up and not where I'm going, as well as jumping, to my repertoire of ways to maim myself.

Anyway. Now that we are coming into the warmer months, I think it's important to be active and get outside. I think a certain amount of vitamin D and fresh air are essential.

I just don't think we should all do it together. In a huddle. Or a group. Or dressed in outfits I wouldn't be caught dead in, even for Halloween (dead cheerleaders aside, obviously).

In terms of activities that we can all enjoy, I invite you to attempt the following with me...

Netflix marathons. The lazy of lazy sports. That being said, let us not underestimate the skill required to sit and concentrate intently through 5-straight hours of House of Cards, American Horror Story, or - ehem! - Hallmark specials. I watched all of season 1 of Frontier in one weekend. As well as cleaning my car, going shopping, and even peopling (read = socialising). Beat that!

Carb loading. I can eat around 3kgs of pasta in one sitting, if I'm feeling really competitive. And not be sick. And drink booze. And walk myself home (read = no one carries me, yay!). What's your special power?

Speaking of scoffing carbs, one of my ultimate goals in life is to eat my body weight in jelly. Preferably port wine flavour, but mango or quandong will do just as well. During the holiday season, I eat a whole fruit pudding to myself - with custard - every week until the 2nd week of January. I know, impressive, right? You should see how much ham I can get through.

When you were a kid, arts and crafts were the height of creative output. Macaroni masterpieces, clay 'animals' (yea, absolutely, totally a frog...), papier-mache. For some of us, the skills stuck and metamorphed into a weird aptitude for making anything out of, well, anything. Think of it like the MacGyver of the domestic world.

Last month, I made an entire robot costume from aluminium foil, silver duct tape, wooden skewers, and some leftover silver satin. Before that, a Japanese ghost costume from cobwebs, a black wig, some ripped red fabric, eyeliner, and talcum powder mixed with concealer.

Finally, should you be so brave to ask, I can convert your house into almost any theme you can think of, using what you already have there. Eat your heart out, Rockwell!

As an entirely underestimated skill, I invite you to attempt another one; matching. Sounds deceptively simple, doesn't it? It is - deceptive that is. You'd be amazed how hard it is to match food, clothes, colours, scents, and a variety of other things people like to put together.

It's not quite as straightforward as you hope food and wine matching is (actually, they've made it harder), so when given the question of red meat with what?, people instantly feel like answering red wine is a trick.

Yours truly, for reasons best left unknown really, can match pretty much anything. I kid you not. Clothes, food, scents. Car colours to personalities. Whitegoods to kitchen styles.

I'd blame (or commend really) the OCD for this strange little quirk, but as it seems to have given me a bizarre edge overall, I've gone with labelling it a 'skill'. If you can outdress, out-colour-code, or out-match me in any way, I'll buy you matching coffee mugs. On an appropriately matched occasion, obviously.

At any rate, for all of you super keen to get out in the sparkling bright sunshine this Summer, don't take this the wrong way, but... 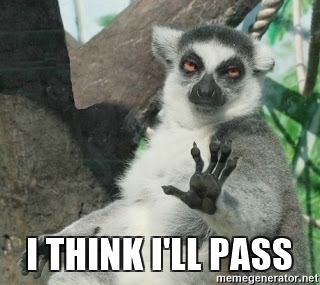 Should you, however, decide that competitive axe-throwing is your thing, I'm in. Feel like seeing how many dumplings you can cram in before you have to roll to your car? Also me.

Want to sit quietly inside, glaring at the outdoors like the humidity is an affront to your humanity, and everything good disappeared with the last chill day? Call me, I know all the best pizza places within a 25km radius.

And I can bring matching beers.