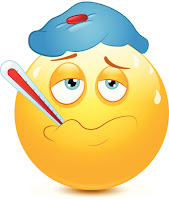 It is a truth universally acknowledged that when one is even mildly under the weather, your nearest and dearest suffer the most.

Far be it from us to be calm and rational regarding a light sniffle, we act as if we are dying of the plague, and expect everyone to act accordingly.

In a truly astounding (but not really) contradictory turn, when we are exceptionally ill, we become calm and quiet, demure and accepting. Almost as if we have made peace at some point of no return, where we trust ourselves to medicine and science and whatever shall happen...

That being said, up to that point, we are irritatingly whiny; how dare a cold bring itself upon you, how dare your knees ache in cold weather, how dare this headache deign to make itself known.

And so on and so forth, until basically everyone within a 3km radius wants to murder us in our sleep.

Currently, yours truly has a nasty throat infection, kindly presented to me over a weekend by my young beau. As gifts go, this is one of the more appalling that I have received. Especially considering the returns policy (or lack of), and only a minor chance of regifting.

To be fair, his repeated paranoid concern that I would get sick was ignored, with the blissful ignorance of someone who hasn't had anything wilder than a mild sniffle in two years, and the blithe disregard of someone who cannot exactly recall  how miserable being sick is.

And so, taking into account the obvious fault of my own stupidity in this matter, I've come up with a list of things one should completely avoid when ill - mainly with colds and the like, as well as a few things you may wish to start doing to stave off complete debilitation, as well as your nearest and dearest taking to you with the closest sharp implement.

Much like this, but applicable to all, certain activities and decisions are best left for a clear head, a calm demeanour, and more than three hours of sleep a night.

I'm desperately attempting to follow these rules of thumb myself, so for those of you closest to me (mainly Mum, who makes me the Best Cup Of Tea Ever); I'm so very sorry, please don't leave me alone with my tissues and no tea. Crying, sick girl is so very unattractive a look...

Smoke
To be honest, I've never done this, but have discovered an unhealthy dislike of people who do. Much like people who smoke in Summer or bushfire season, smoking when you have anything respiratory seems like the height of ignorance, as well as the big middle finger to, well, generally everything.

You are, in fact, going to pass eventually. Perhaps you may wish to halt that process, albeit briefly, while your lungs regain the ability to fight back. Just a suggestion.

Exercise
Ok, this one needs to be taken into consideration depending on how ill you are and whether it will be a help or a hindrance. But again, if your lungs are in no position to fend for themselves, one hardly suspects they will be up for a brisk jog around the park in sub-zero temperatures.

Reasonably sure the paramedics will be equally unamused.

Eat rubbish
From a headache to a cold, and everything in between, junk food is the go-to when you aren't feeling well. Admittedly, your body does actually need extra sustenance when trying to kick a cold or flu, as it's burning through what it has as fuel to fight the bacteria, but not the way you're doing it.

If eating two large pizzas, a garlic bread, a pint of Haagen Dazs, and countless Tim Tams is how you get through a bit of a turn, now is the time to start wondering why you still feel crap when the illness actually passes.

Try cramming some vitamin C in there (orange juice and Brussels sprouts, vile things, actually work wonders), eating a heavy but healthy pasta (good carbs are your friend), and for goodness sake, listen to your mother and drink more fluids. She's not saying it to torture you. Or not just to, anyway.

Make life-altering decisions
Much like PMS decisions, this one seems self-explanatory. Things like getting a haircut, buying a car, asking someone to marry you, etc. should be postponed until your brain cells achieve acceptable levels once more.

If you've already half planned something anyway, you might be ok...

However, remember that time you thought getting a new do and a blowdry would be a fabulous idea in cheering your manky self, and you came out looking like Freddie Mercury (1975, not 1985)? Remind oneself of this should the desire persist.

D & M's
This is a tricky one, because it depends entirely what sort of person you are when you're not sick.

When well, I tend to be pretty good with the deep and meaningful stuff; I like to have frank and honest discussions, lovely heart-to-hearts, and  examine profound issues with respect and compassion. When unhealthy, I become cranky, moody, and overthink pretty much everything. If trying to decide what to have for dinner is a mission in patience, asking me how I feel about interpersonal relationships is likely to be exhausting.

On the other hand, some people become positively energetic in their debate skills when sick. They make effective decisions, discuss personal issues with ease, and have no problem sticking to their guns when engaged in arguments.

That being said, these people, when well, also answer "where do you want to go for dinner?" with "wherever you want to go", and can repeat this until essentially, you lose the will to live.

Google your symptoms and / or self medicate
Firstly, let me clearly state; this is the pot calling the kettle a rather distinctive and attractive shade of black in terms of the latter, so feel free to take this one with a grain of salt (or turmeric, whatever works...).

Googling your symptoms is stupid for So. Very. Many Reasons. Not the least of which is that Google is not a doctor, any sort of medical professional, or - more importantly -  a human being at all. Which almost completely negates its ability to have any idea what is wrong with you. Please tell me I don't need to explain this?

Self-medicating, on the other hand, is not all bad however. If we come back to the standard lurgy; taking a few cold and flu tablets, sucking some lozenges, gargling with an over-the-counter fluid, and generally dosing up with a few judiciously chosen meds, is a pretty decent idea. You're trying to kill the worst of the bugs, whilst giving your body a chance to work its own immune system magic.

It all goes a bit pear-shaped when you start taking those anti-biotics from 2014 you had leftover in a drawer, downing hot toddies by the bucketful, and popping random herbal remedies that may help your chest but also give you a decidedly unsexy rash.

If you're sniffing and croaking but keeping it together, grab some Lemsip and ride it out a bit. If you're coughing up muck and fear the loss of vital organs, go and see a doctor. Don't be such a wuss.

Caffeinate
Dear gods, I wish this wasn't true, but coffee and caffeine are actually bad for you when you're sick.

When you're healthy and bouncy and full of beans, caffeine makes the day just that teensy bit more so. It can perk you up, warm you up, and give you the warm and fuzzies to get through a Monday without saying fuck too often. It's red cordial for grown ups.

Sadly, when feeble and run-down, caffeine only makes this worse. Your body has no ability to rally because it's expending all its energy on fighting bacteria, and trying to push it further just makes it work harder.

Caffeine makes you even more dehydrated, can set you back even further, and possibly keep you up all night sniffling and unable to sleep.

Go to work
Likewise, this is a pot-kettle-black moment.

I do try much harder these days to distinguish between just feeling lousy and actually being quite sick, but occasionally I'll still schlepp myself into work, pale as off milk, gravel-voiced and dark-eyed, and sit there until someone tells me to take my pathetic ass home.

If you had to sit down between dressing and eating breakfast because the former tired you out, stay home. If the thought of public transport makes you want to cry, stay home. If your ability to be a professional is compromised, and you think the height of achievement will be not coughing on a client, STAY HOME.

The business will survive a day without you, and being the person who started the Great Gastro Epidemic of 2017 is not a prize to strive for.

Finally, try to remember; you will get better eventually.

Admittedly, after the 8th straight day of coughing like an asthmatic camel, forgetting what sleep is, and having everything you put in your mouth taste decidedly medicinal, you're probably feeling like deep-fried poop with a side of snot.

But really, I swear, you will get better. So, back on the lounge or into bed, fire up the Netflix and grab some hot water bottles, and drown yourself into tea.

And I'll see you all in Spring...you know, for hayfever season...