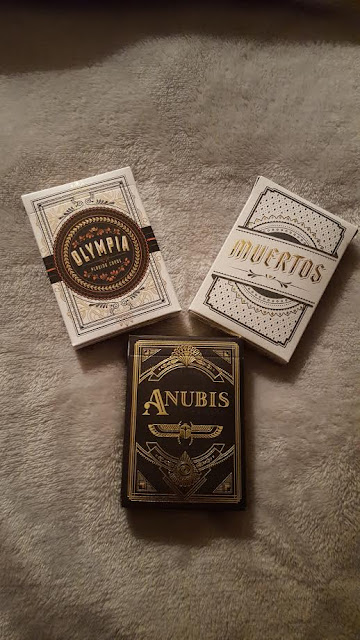 When I was a teenager, I would ask people to bring me back match-boxes or -books from their travels, no matter where they went. When I was old enough, I started to collect them myself.

Surfers Paradise in Queensland. Voodoo Lounge in Las Vegas. Christchurch in New Zealand. Ivy Bar in Sydney. The Elephant and Wheelbarrow in Melbourne. Everywhere. Little packets with exotic names or cute decals on the packaging.

Sometime in my late teens, the wooden box I kept them in on my verandah got stolen. It was probably kids and just a malicious prank - they weren't worth anything, really - but it broke my heart.

For a while, I didn't collect anything at all.

The first deck of cards I was ever given came from my grandad. They had to already be a million years old and he gave them to me in this old metal tin, like a fifties biscuit box, which I still have. They're teeny, about the size of a matchbox, with perfectly shaped and detailed suits on each card. I adore them.

In my early twenties, I went on a work trip to the snow at Jindabyne. I'd never been before and with no desire to ski, I spent a decent amount of time drinking and dancing in a pub called the Kessler.

I bought a deck of cards from the giftshop; they're covered in snowmen in scarves and beanies and are completely adorable. Pretty sure these were the second deck I bought myself, but they are the first I remember the story of.

The first deck are from Smiggle. They have stylised voodoo dolls on them and make me smile every time I use them. I can't recall exactly when I bought them or why, only their sequence in relation to the others.

These cards talk to me like a Tarot deck, but faster, like describing scenes while people-watching in the street. During hand after hand of Solitaire, the deck describes various scenes to me; see the lady standing alone, if her gentleman does not come soon, she will not wait any longer. Watch the group of young ones - 2, 3, 4, 5 - all by themselves, they need to join a bigger group or they will create trouble on their own.

My head spins a little, but sometimes the scenes come true...

Bali's Classic Wayang deck came from Seminyak in Indonesia, when Mum and I went to Bali in 2014. In a beautiful cafe/restaurant/bar called Biku, we had dinner and high tea and Indonesian desserts. Everything was panelled in wood, and heavy bookshelves held sarongs, books, and scarves.

Tucked amongst the treasures was this exotic little packet, covered in classic wayang characters, which are puppets that tell stories of the gods. I keep some of the plastic on the outside of the deck; it keeps the faint smell of spices and oil alive.

It was my first overseas trip, and I can still feel the humidity in the air like a breeze passing by. The noise and dust, the people and their endless parade of balancing acts on scooters. This deck reminds me of strange, far away places.

Ned Kelly and Hobbiton don't always remind me of my ex, even though he travelled with me on both these trips, but of the places we went; Old Melbourne Gaol in Russell Street, and Hobbiton / Lord of the Rings farmstead, respectively.

Neither have overt personalities, though Kelly boasts some great pictures of the bushranger and his crew, including famous one-liners and last words. Though not my favourites, they are both dear to me for the memories they hold.

The Favole and Alchemy decks, both by a playing card company called Bicycle, do remind me of my ex. But not in a bad way.

We went to a comic book fair out at Blacktown. Or perhaps it was Westmead. I don't rightly recall, but it was in an old town hall, and people had trestle tables set up with so many things; childhood toys and action figures, dusty boardgames and cards, comics by the crate-load.

The decks are both sad and creepy. Favole has harlequins of all types, clowns with greasepaint tears on each cheek, and stylised vampires, all by a Spanish artist named Victoria Frances. The Alchemy is darker still, with skulls and bleeding daggers, burning eyes and grinning, motorcycle-riding skeletons.

These decks remind me of the fun and nerdy things we used to do, the comics, the toys, the endless fandom discussions we had.

But all things die, and so did all of this. Melancholy decks that remind me of someone who no longer exists, but in my memory. Sometimes memories treat you better than people do.

Mum and I went to the Phryne Fisher Costume Exhibition at Old Government House in Parramatta around August in 2016. We wandered around the costumes and stage-set pieces, marvelling at the skill in the gowns, the detail of the sets, and the sheer glamour imbued in it all.

I ahhh-ed and hmmm-ed in the gift shop at the decks, nestled between vases of coloured feathers and engraved notebooks, finally settling on Nathan Page's stern but charming visage.

The gentle sun and the lovely parkgrounds nearby made it a perfect setting for afternoon high tea, and these cards will always bring to mind elegant settings wiled away at leisure.

The IKEA deck is almost not worth mentioning, except that the figurines on the Joker and the high cards are so very...Swedish.

This wonderful little deck is functional and odd at the same time; the Joker has a Mr Squiggle-like hat and nose, as well as six spindly arms. The costumes are weird and the colours are bright. The back of each card has paintswirls of teal and blue, and is deeply relaxing to rest your eyes on.

Here I see a deck that will be used for games with friends, and bonding over putting together IKEA furniture (something I adore and mostly everyone hates). Sometimes you buy things just for fun and as a reminder of mundane places you like to go.

Deck O'Meals are my second-to-last purchase, and come from one of my spiritual homes, New Orleans, and Mardi Gras. Each card has a southern recipe on it, from crawfish to etouffee, and deep-fried alligator and gumbo.

I can't bring myself to play hands with these cards yet, as the memories of the trip are slippery in my mind and play tricks on me depending on the light.

I miss parts of New Orleans with a yearning I guess you don't know until a place gives it to you, and would rather forget others (the delay in LA will forever sour the end, but hopefully fade in time).

Directly post-NOLA at home bought a tragedy I can never get over, so my heart is still untangling the feelings of both, even though my head knows they are separate things.

That being said, when the weather becomes really cold (it's not yet, don't be such a wuss), and time has done its gentle magic, anyone feel like trying some authentic southern cooking? I promise not to poison you...

We come, finally, to my most recent acquisitions; the Steve Minty decks. I wish I didn't play favourites, but at present I'm falling a little in love with them.

Each one is a little work of art in themselves. Muertos Mourning are a celebration of the Mexican Day of the Dead. Intricately decorated faces and hats, dangling earrings on grinning skulls, swirls and dots, all in black and gold on white.

Olympia is exactly what is sounds like; all the Greek gods in all their glory. Zeus and Hera, Hermes and Apollo. My patron, Artemis, is there too, looking contrastingly fierce and elegant.  All gold and grey and black on white, but different from Muertos, completely different.

And here, the one that leads this trio, the Anubis deck. Gold and red on black. Mysterious, alluring, sinister. Each picture looking every inch as exotic as the deity they represent.

All these decks are made of the most exquisite-feeling paper; strong and silky, with the tiniest little bumps, they glide through your hands like nothing so much as a flow of water.

I bought these after watching episode 4 of American Gods. Laura Moon is working in the casino, and her hands deal the Anubis deck as they have a million times before.

But my eye is caught, immovable. I pause and Google. And research and squint in wonder at the pictures on my little phone screen. And then I get my laptop out...

I guess not all my cards are reminders of places. Sometimes they remind me of things. Wondrous things.

In this life, all we really have are our memories. We cannot recreate events like they are a film to be played over and over. And even if we could, there's no way to be sure we'd feel the same way about them if seen again.

But sometimes, just sometimes, we can enclose them in articles that sing to our hearts, creating a golden thread that outlasts time and other experiences.

We call these talismans. Objects that hold our feelings, as we would forever hold water in our hands if we could.

These are only some of my talismans, but they hold part of my favourite memories; some sad, some joyous, mostly both.

If you ever feel like sharing the stories of your talismans with me, I would be most honoured. Thank you for sharing mine. 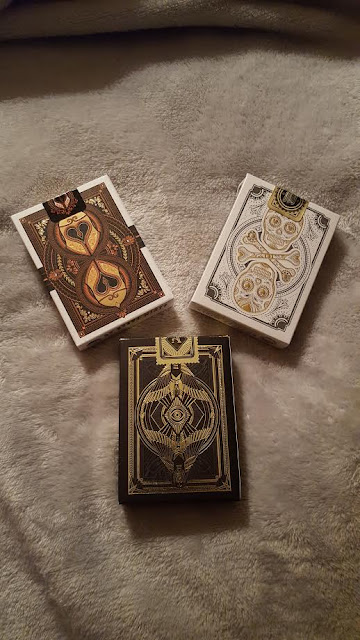