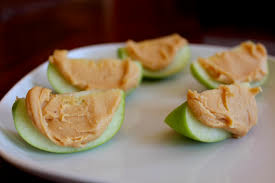 In the kitchen at work the other week, I had my co-workers in slightly stunned silence watching me make lunch. It's not the most well-equipped of kitchens - most office ones aren't - so I doubt it was my cooking skill.

Apparently people I work with hadn't seen baked beans, green apples with peanut butter, or hummus and avocado on toast in years. Years. They loved certain things like this (or had their own version), but stopped eating them years ago.

To be honest, I'm not sure who was more baffled; them or me...

You see, my childhood was made up of a colourful wonderland of culinary delights, ranging from the homely and mundane, to what can only be described as the epic masterpieces my mother produced that were our birthday cakes.

I wasn't the healthiest of kids; I was born with asthma, so eating and breathing were difficult. Hell, breathing and anything was difficult. Still, I was fed baba ganoush with pita bread. I ate honey sandwiches and drank apple juice by the bucketload. I had laksas and soups, cheese and Vegemite, whole BBQ chickens and ladies fingers.

What I'm saying is; I ate lots of really healthy food, lots of delicious food, food that I still eat today. I mean, why wouldn't I? I adored it as a child, I adore it now, why would I stop eating the things I love...?

And the people I work with don't. Some (read = most) eat rubbish and some eat healthy. But this isn't a judgement call on their health, it's a question mark on habits. Hold that thought...

Not long after the kitchen mystery, I read this article. I don't know whether it rubbed me the wrong way straight off, or I couldn't figure out if it was meant to be tongue-in-cheek.

First of all; no one decorated their home like a log cabin, except people who actually had log cabins, and considering Typo now supplies these, I'm not sure we can really make a judgement call on stag heads (unless they are real and recent).

Secondly, when did white flowers go out of style? And who would care about the difference between decorating with flowers or greenery? Journalists with too much time on their hands clearly.

Lastly, but by no means least; political slogans in your home are a personal choice. And I'm not saying I'm going to judge you for plastering your walls with Love Trumps Hate over your old Live, Laugh, Love mantra, but I am. How about we have an actual discussion over the state of the world as opposed to being thwacked in the face with it in foot-high lettering.

Some people decorate so that others can admire their lovely homes. Some people decorate for themselves, and only themselves, even if the style is unusual or uncommon. Neither is any better or worse than the other if they make you happy. If you gather things around you only to please others (with nothing that really enchants you at all), then I'm reasonably certain you're going to feel pretty underwhelmed by your surroundings.

Honestly, apart from keeping things safe and liveable, why would other peoples' taste make any difference to yours. Still baffled by that one...

And so it occurred to me recently that we spend an awful lot of time trying to make ourselves look like adults, like professionals, like well-put-together individuals and groups - for other people. Not for ourselves.

We don't do the stuff we did as kids, because apparently it's only for kids. Even though it hurts no one and we still really enjoy it. We put modern, dull furniture in our houses, because apparently flowers and scented candles aren't done, and we couldn't have anyone knowing we enjoy them, could we?

Which is weird, as no one else can make us happy in this life but us, albeit with the company of some really great, supportive people around us.

So I guess my point is this; eat devon and tomato sauce sandwiches at 37 years of age (though not all the time - that stuff will kill you), wear scrunches in your hair, watch kids TV shows.

Reminisce about Swatch watches, stick on earrings, Garfield, and weird breakfast cereals. Use CD's instead of streaming if you want, laugh at dial-up internet, borrow library books sometimes.

Have a grown up lounge set, with Batman cushions and old-English throws. Don't stop being you because you grew up; find more things that are you as a grown-up.

We will love all of your things - because you love them.