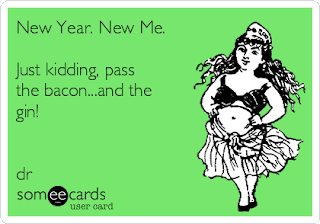 The first post for the new year was going to be deep and meaningful. It was going to be witty, insightful, and full of great ponderings we could discuss at a later date. We were going to muse over it together, and even, perhaps, marvel at my wisdom in reflecting on this life...

Then I remembered I'm still me - Bridget Jones* with better hair, better clothes, and more sarcasm. And so, obviously, we got this instead.


***
As discussed, I don't really do new years' resolutions. Clearly, I'm all about constantly bettering oneself personally, professionally, mentally, spiritually, etc. It's just that I don't see the point in picking the end of a calendar year as time to start doing so. Mainly because, for me, it leaves waaaaaaaaay too much time to think about whatever it is, and possibly avoid doing it at all.

That being said, the end of the year is a really good time for our society to put a marker on things that may have happened before or after it. For example, if we all spent too much time drinking coffee one year, the first time the option comes up in the new year, we could all refrain, or even change the habit - maybe order chai instead.

Unquestionably, this is a completely imaginary situation and should be treated as such. No one drank too much coffee in 2016. Except maybe Trump, and that would explain a lot really...

There's a variety of things I'm glad perished with the last sunset of 2016, things that really went on too long or definitely needed kicking much earlier than new years'...

The inordinate amount of checking out on the celebrity front, not to mention some of our favourite personal heroes, is one.

And juuuuuust as the year was about to close...William Christopher. Unnervingly, by no means an exhaustive list.

The gods basically put together their best of the best party list, and the invites got sent out. Some took up the offer and others didn't. I think it's always going to be deeply unsettling when someone passes, even if their time may seem to be up, but the hits just kept coming last year.

People die, that's how life works. But sometimes it seems as if all our heroes are heading off somewhere we can't follow, and a little bit of our innocence vanishes with that knowledge. Being a grown up sucks. But at least there are more positives than negatives.

Politics got weird in 2016. I mean, real weird, as opposed to the usual dog and pony show we're used to here in Oz. For example, there is now an actual clown in the White House.

This time last year, if you'd asked us all - if you asked America - what could happen to the Presidency, this would not have been the answer.

This would not even have been close to what we could have come up with.

Here's something we all need to keep in mind however; we don't live there. Of course, this will impact us, but (BIG BUT) we can't really bemoan how awful this is going to be, because there are people who are going to have it worse.

So, to be honest, in 2017, let's all try to be thankful we're not Americans of any race, living in America, wondering what tomorrow will bring.

Turnbull may be a rich idiot, and Abbott was (ehem, is) an embarrassment, but neither of them is a tangerine, racist, sexist, mouthy twit with a guinea pig for hair. Perspective, right?

Speaking of odd political situations, another word comes to mind; Brexit. I'm not sure if this is more or less depressing than the above, due to it also being something the people voted for, but there it is.

Without completing overexplaining why this probably wasn't the best choice the UK could have made, let's narrow it down to a few minor points; exchange rates won't be great, expats here and there will find things difficult, the price of living will fluctuate, and things will basically go to pot.

And this is all before the two-year period it takes to actually implement the full exit of Britain from the European Union.

And so it will come as no surprise then, that most people are treating it like a joke. Even if a clever one at that... 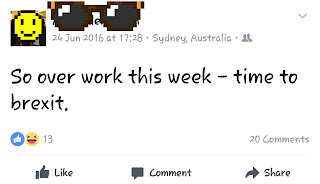 Before we get back to the tongue-in-cheek funny stuff, I'm going to say a few of these real quick, in the hopes that we don't all get deep and meaningful existential despair with the absolute craptastic state of the human race...

Yea. Ok. That was still pretty awful. I don't suppose we could try to give peace and love a chance in 2017? Anybody?
***

To ease the sting of the above and take things on a truly bizarre turn, I've got two words for you; killer clowns. No, that's not a typo. Sorry.

The creepy "craze" began in the US, spread to the UK, and finally hit Aussie shores in the latter half of the year, like some horrifying, red-nosed, big shoed, walking, talking Ebola virus.

It looks like fandom took a distressing turn, when talk of the remake of Stephen's King's IT inspired a variety of freaks and horror geeks to dress up and terrify all and sundry with pranks, scares, and even violence.

When I was 13, I punched a clown. We won't go into the wherefores and whys, except to say that clowns of all varieties (even harlequins on occasion) still creep me right out.

So let me make something crystal clear, right now. When the remake gets released in September this year, I'd like all you sick fucks to know one thing; my right hook is nasty as hell, and I'm not afraid to use it. Repeatedly. You have been warned.

Alright, without listing all the other disappointments of 2016, they were the major upsets. Some years are good, and some can just take a very long walk, off a very short pier.

It is however, unfair to say that the entire year completely sucked. Sure, we haven't been so glad to see the back of something since Nickelback's She Keeps Me Up (even I couldn't get past that one), but it wasn't all doom and gloom. Really.

Let's look at some good stuff, and the even better stuff to come.

The tiger population experienced a 22% growth level, hurrah! This didn't quite take them off the endangered list, but it certainly looks promising.

You know who did make it off the endangered list? Giant pandas and manatees. Look at them! Look at their awesome, smushy faces! Hurrah for nature, right?! If humans can't take care of themselves, at least we know beings who deserve to be here will eventually inherit the earth.

There's now a vaccine for Ebola. I KNOW RIGHT?! One of the deadliest diseases of our time, something we made sci-fi movies out of, now has a vaccine.

Also, the ALS ice bucket challenge - you know the one we all rolled our eyes at in 2014? - led to a breakthrough for sufferers of motor neuron disease.


Which means, as long as we try to stop killing animals, other people, and ourselves, the human race actually has a chance at long-term survival. Hold my beer and watch this...

A part of Sydney's heritage was saved by an unlikely (mainly because he's personally a bit of a prat) hero, in the form of Justin Hemmes; The Alexandria Hotel.
The oldest building in the area and shockingly not on the actual heritage list, Hemmes purchased it just before the wrecking ball could do irreversible damage.

Which renews our faith a little; he may be a tool, but he knows real estate, he knows hospitality, and he will show The Alex the respect it deserves. Nice one, Hemmesy.

***
In the microcosm of yours truly, notable events include seeing Rob Thomas at the Opera House forecourt, finding a bar dedicated to espresso martinis, and punching it up on the efforts for a mini faerie.

I drank more coffee, found my spirit animal (read = it found me. In a BIG way), and got to spend more time with my Mum.

There's a new job, a new social scene, and some new faces here and there. Some things left my life that I don't know if I was quite ready to say goodbye to, but it was definitely time and I'm the better for it.

This year is still pretty young, with lots of unknowns, seedlings of plans we can't be sure will work, and hopes we have no way of ensuring.

Here's the thing though, as a final thought, something to keep in mind whenever you feel insecure throughout the year...
If Leonardo DiCaprio can finally win an Oscar, you can do anything. Trust me. 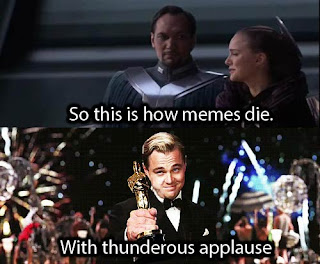 From now on then, we know exactly what my Aussie version of Bridget Jones shall be referred to as; Charlotte, Charlotte Smith, right here.