[ PMS decisions you will instantly regret* ] 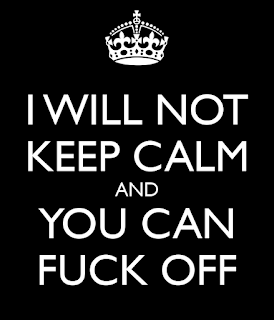 Women get periods. We all know this. No one likes to talk about it, we all pretend it's this normal, natural occurrence that women just carry on with, and mostly people expect us to be all demure and stoic about it.

Bugger off to that. I'm bleeding like a stuck pig here, sweating like a wet dog, and my hormones are making me alternately batshit crazy and serene as a rockpool. Keeping my shit together enough so I don't look like I want a cheeseburger and a good cry every half hour is taking up most of my willpower right now.

When not floating on the crimson tide, I can maintain my agreeable feminist side, an even tone of voice, and make decisions without asking myself random existential questions. I can even do this during my monthlys.  Sort of.

Sadly, however, there is that 1-3 day stretch where I turn into a complete trainwreck, and all reason seems to fly out in the window in the face of pure, emotional freefall, and anything more important than when to have coffee becomes fraught with danger. I question reality, career choices, dress sense and general good taste.

In an effort to contribute to the sisterhood, and give the rest of you a heads up - including period unicorns, i.e. you wenches who sail peacefully through the month like an Olympic figure skater - I've compiled a list of things that are really best done when the rush passes.

These are some things that you absolutely want a clear head for. So, if you just spent 25 minutes in the bathroom aisle at Coles trying to decide what brand of electric toothbrush to buy (totally did that a few months back), do not attempt any of these during your periods. Only disaster awaits.

This is quite high on the list because getting a new do is an emotional event anyway - hello, new hotness! - but can also be fraught with anxiety. This is mainly due to the long, overly complicated way you just tried to explain what a cross between Rihanna and Morena Baccarin looks like.
You know what adding periods does to this situation? It puts you in a room full of strangers with a head full of tacky foils, crying your mascara off and paying $250 for the privilege.

2. Break up with your partner

Ok, so you hate the way he always patronises you about, well, everything. Or, it really irks you how she keeps making veiled insults about everything you wear. And, FFS, will they stop saying how pretty you look in that tone already?!
Does it really? Has it always? Have you always wanted to hit them repeatedly with a frypan when they do this, or is it just today?
Telling your significant other to go jump may make you feel better and liberated and wonderful when you are high as a kite on the hormone buzz.
It will also make you feel shitty approximately 2 hours later. Then comes the sinking roundabout of dread on whether you have made the right decision or not.
Then there's the endless text messaging about you not meaning it / very sorry / very VERY sorry / can we get back together, and the self loathing about being such a doormat.

Skip it. Eat a donut, have a good sleep, reconsider tomorrow. At the very least, you can store up a litany of these incidences for a proper rage fest next month.

Period brain is much like pregnancy brain; complex concepts seem to be a breeze, but a simple cheese toastie seems to be the equivalent of brain surgery.
Anything more complicated than opening the fridge door suddenly becomes like that scene from Indiana Jones, where knives are waiting to chop off fingers, ovens want to burn any exposed flesh to a shiny crisp, and the kettle is in attack mode.
If you can even make it from the bedroom to the kitchen without falling over, stubbing your toes, walking into walls, and generally with all limbs attached, call it a win and just treat yourself to hummos and dip. That's still considered a meal.

4. Talk to the anyone in your office who usually irritates you, even on your best days

There's a guy in my office who I avoid like he's radioactive. He's sexist, rude, invades personal space, and generally makes me want to staple things to his head. This can all be on a normal day, when I've had oodles of sleep, a good cup of coffee, and am feeling all sunshiney.
The last time I spoke to him in full flush, as it were, I nearly slapped him, told him to get the fuck away from me, and raised my voice to several decibels above the Krakatoa explosion.

Email. Text. Yammer. Send a carrier pigeon. Either way, make a point of avoiding them like actual radiation. No one wants to sit in a disciplinary meeting explaining why you duct tape a colleague to the noticeboard and threw cream cheese at them for an hour.

5. Buy anything more expensive than groceries or that has a greater selection than red or white

It's 3 days. Tops. Buy some leafy greens, some soup, two tubs of Haagen Dazs, a bottle of wine, and call it a long weekend. Netflix was invented for a reason.

Please tell me I don't have to explain this?

In the depressing case that I do, think about it this way; in your twenties calling your ex had the highest risk that they were sleeping with or dating someone else. Ego blow, but not the end of the world.
In your thirties, said ex may now be married to, have children and French bulldogs with said someone else. Dire, heartbreaking. Cue hysterical, unattractive sobbing, much eating of crap and drinking of vino.

Worse, they may be delighted to hear from you, over the moon you want to catch up, and more than happy to foot the bill for dinner. Don't be fooled; this is how you end up in bed again with someone who thinks McDonald's is a food group and can't remember your mums' name.

Make no mistake, I advocate a wee tipple at the best of times, even during the moon cycle. Good for blood flow etc.
But recall that episode six months' ago, where you decided to have one cheeky drink alone after work; suddenly it's Sunday morning, you've lost 2 days, $200, your favourite pair of knickers, and someone ambiguously named 'River' keeps calling.

Buddies are but a speed-dial away. Just a thought.

So that's my shortlist. Or the best list of stupid things I have done while the bloodflow has been directed downwards, thereby depriving my brain of clearly much needed oxygen. It's not all wrapping yourself in cotton wool though. The shortlist of things I do recommend is pretty fabulous as well.

Listen to Queen and Bon Jovi. Sing along. Nobody loves a good sing more than when you are feeling emotional.

Drink beer and watch action films. Your tummy is already bloated so you're not going to notice the difference, and nothing sorts a good hormone rage like watching muscly badasses of both sexes blow shit up.

Have sex. Or get a massage. Or both. How those cramps feelin' now huh? Trust me.

Ask your mum's advice. Decades of doing stupid shit, then not doing the same stupid shit, makes them a goldmine of information and funny stories. Take them a bottle of something fizzy, some flowers, and make a day of it. Guaranteed there is nothing you have done that they haven't.


*Or, Things that I have done on a hormone rush you might want to avoid