[ of all the things you could suck at in life, you don't want it to be breathing ]

Asthma is a common long term inflammatory disease of the airways of the lungs. It is characterised by variable and recurring symptoms, reversible airflow obstruction, and bronchospasm. Symptoms include episodes of wheezing, coughing, chest tightness, and shortness of breath.

So says Wikipedia. This doesn't really cover all the bases with what asthma is, but it's a good snippet if you've never heard of it.

Science doesn't actually know what causes asthma. Sure, they say they believe it can be a combination of genetic and environmental factors, allergens and other triggers, but this doesn't really nail down why some people get it and others, with similar conditions or factors, don't.

I've spent half a week off work, thinking I had the flu which set my asthma off. The doctor asked me if I had upped my asthma drugs and I said a little, and he looked at me blankly. I had a mildly awkward-Oprah Winfrey lightbulb-moment. And then he said it out loud; the flu isn't making me sick (my immune system will kill off the virus in short order), the asthma is.

Well, fuck. Did I feel like a right fool. 34 years of respiratory problems, hospitalisations, steroid medications, preventatives, and generally avoiding triggers, and some random doctor reminds me that I'm treating the wrong issue.

I've had it since birth and generally it's well-managed. I haven't been hospitalised since I was 14, and if an ambulance has to be called, I generally just need what's called an oxygen driver2 to get the meds more firmly into my lungs, and that usually does the job.

I'm so used to having this under control and my action plan on autopilot, that when it does flare up I honestly suspect it's something else.

It's not. It's the bloody asthma.

Being an asthmatic sucks. Literally. Everything sets you off; dust, pollen, cats, a windy day, some types of booze (I know, depressing right?). And everything makes you tired; eating too quickly, walking up a hill, running up stairs. You basically spend your time as an asthmatic being weak as a kitten and moping about. 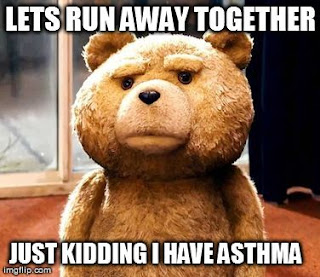 However, asthma isn't exactly a death sentence. Modern medicine has made it extremely feasible for asthmatics do 99% of the stuff they would do without asthma. Properly managed, most cases can live normal lives, work in whatever job they want, and do all the things they enjoy.

(Except running. No one enjoys running. Unless a zombie is chasing me, I'm not running anywhere)

There is also the funny(ish) side to asthma.

Don't want to go to gym class? Not a fan of team sports? Or sports at all for that matter? 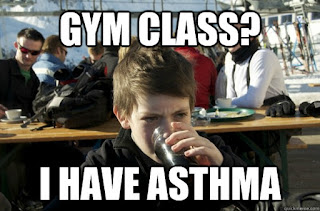 Now you can be even geekier than you already are, and make Star Wars jokes every time your asthma flares up. Better yet, get a Vader helmet, wear it when you are taking your nebuliser, and quote Darth until someone makes you stop. 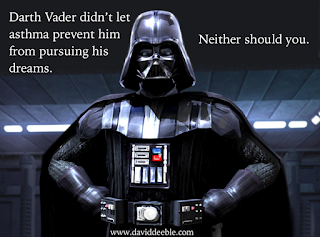 Sitting on the lounge by yourself and you hear a noise. What the hell is that? Is it the wind? Is it the gate? Is someone trying to break in and the door is squeaking?!

Nope. It's you. Asthma has created a weird whistling, squealing noise in your chest. Try not to choke while laughing your ass off. 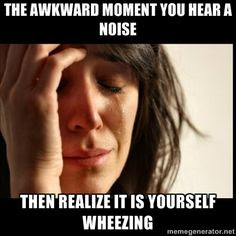 Asthma is annoying, hard to pin down, and somewhat depressing. No one can see you have it; it doesn't display itself on your body like some conditions. And trying to explain to people the reason you can't breathe is because of an unseen, usually random, element in your environment is much like smashing your head against a brick wall.

Here's the thing though; asthma is treatable. It's not (quite) as nasty as diabetes, heart disease, or cancer. There is no cure, but the rate of deaths from asthma has remained stable since 2003 and was only 0.3% of all deaths in 20123.

As much as asthma can be a real drag, it's hard not to thankful you didn't win top prize in the craps lottery of life; there are much worse conditions, with less managing medications, research and funding, or even knowledge for that matter.

And as someone who does get pretty dejected when I spend days at a time doing nothing but medicating and resting4, I know how it feels.

At the end of the day - or the middle of the afternoon, or 11am, at work, at my desk really - asthma is a little rubbish disease in a world full of big rubbish diseases. Plus, after 3 to 5 days of medicating, taking it easy, and generally wrapping myself in proverbial cotton wool, I get better until I'm pretty much back to normal5.

So, I'm raising a toast to all my respiratory-challenged sisters and brothers and saying, let's be grateful we only suck at breathing. Honestly, it could be worse.

1. Asthma Australia
2. Using an oxygen tank to administer medication, as opposed to an air tank. Without complicated explanations; the pure oxygen facilitates greater access to the lungs than just 'air' would.
3. Asthma Australia - Statistics
4. When an asthmatic says 'resting', it means literally that; you've never seen someone so bored from sitting still for so long.
5. My version of normal. Obviously.