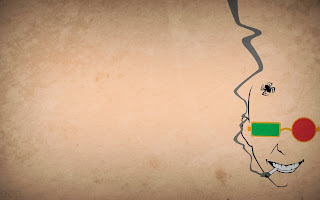 A while back, Domain.com posted an article about the 30 things you should do if you live in Sydney. It had a few that were tongue-in-cheek, but on the whole it was a nice attempt at telling Sydney-siders there's stuff they should do if they live in our fair city, especially if they've never done them.

I felt it wasn't a very comprehensive list, and much like other lists and articles that try to follow this vein, it didn't really give you an idea of what it's like to live here.

In the words of Spider Jerusalem, I hate it here. And, much like the magic man himself, I keep coming back and I stay living here. Why? Because I love it too. Closely related to my relationship with peanut butter, Sydney and I spend too much time together until we are thoroughly sick of each other, then storm off in disgust until the feeling wears off. Then we wander back to see that it's not too bad, you can, just occasionally, have too much of a good thing.

So, in the spirit of the hot weather we endured - which I also loathe and adore, in a 70/30 measure - here's a short list of places and things for Sydney-siders. These are only the places I have and do spend the most time (read = drink the most coffee). You all know I could bore at length on the Sydney surrounds as well, so be thankful I kept this one short.

Things I hate about you...but mainly because I love you so much. Enjoy.

1. North Sydney - the 'burb where I used to work - is as good a place to start as any. There is fuck-all to do there, and it took me approximately 8 months to figure that out. Mostly, I got distracted by reasonably decent coffee. Or baristas who could make decent coffee.

There was no Coles* or Woolworths here, there's no LUSH or T2. Subway is the biggest chain apart from OfficeWorks, and there's only so much Typo and Priceline merchandise I was able to occupy myself with until serious boredom set in. I'm used to the CBD figuratively smashing me in the face with its wares; North Sydney is like a dull slap from a wet fish.

That said; Wendy's Secret Garden. Brett Whiteley's widow, and an artist in her own right, cultivated this garden by her own hands after her husband and daughter died in the '90's and early 2000's. This sprawling oasis of beauty set next to the train tracks and the harbour revives the spirit and enlivens the soul. I spent many, many lunchbreaks here, lying on the grass and watching the clouds, the birds flying high into the sky until they were specks on the horizon, butterflies of all colours flittering about, and bees lazily dipping from flower to flower. Something so glorious in a town so bland saves North Sydney from being a crushing bore.

*A Coles literally just opened in October and North Sydney-siders are flocking to it like the proverbial mecca.


2. Maroubra. 6 of my very formative years were spent there; mostly throughout high school. Good grief, I hated that place. Maroubra can be rough as a rusty nail and just as shallow. Home to one of the most infamous teenage gangs - the Bra Boys - the 'jung-o (short for Maroubra Junction), as it was somewhat fondly referred to, spent much of the 90's being a place for teenagers to get up to mischief in quiet streets, the non-descript little shopping centre, and the ever-present McDonalds.

It probably didn't help that I passionately hated high school and couldn't wait to leave. A highly strung teenager, there was only so much Mum could distract me with while I was waiting to be a grown up.

On the flip side, and very nearby, is and was the hulking mass that is Eastgardens. Sometime in my adolescence it got considered its own suburb, but the Westfield it started off as is not the building of today. Back then, it was where I had my first few jobs and where I spent a lot of afternoons wasting time. It has since gained a storey or two, cultivated airs it doesn't have for such a neighbourhood, and generally aged, if not gracefully, certainly not badly. I love Eastgardens. Most of my best and worst teenage memories are here. It's a comfortable place where I can get all my groceries, see a movie, buy birthday presents, get a coffee and a salad, and spend a little too much money in JB HiFi. May the gods let this rock that kept me (mostly) out of trouble as a teenager never crumble.

3. Current home and ruling favourite; Newtown. I'm not going to gush because I'm pretty sure you all know how much I love it here. The food, the shops, the people, the quiet, the gardens, the weird twisty backstreets; I adore it.

It's not all rose-tinted glasses though. Newtown prides itself on being the hippie-est, most tolerant and worldy. We're not. We're just better at faking it than everyone else.

Because of the exceptional diversity here, we are able to puddle through looking chilled and relaxed without breaking a sweat. That being said, scratch the surface and Newtownians show how hard they work to maintain their hip inner-westie-ness.

Our little borough has just as many loud, obnoxious political voices as Canberra, we're just touting something different. We have lower rates of crime, mainly because we don't stand for much more than petty theft and a tussle at the pub. We attract a mix of students, families and alternative corporate types, who generally mix well on a day-to-day basis. All in all, Newtown is still a groovy place to be. Like everywhere else though, we have to move with the times, and we seem to be evolving well, both structurally and economically (if somewhat slowly).

Just don't get a WestConnex conversation started in the pub on a Sunday afternoon; much like the Hotel California, you can check out of the group, but they'll never let you leave.

4. Centennial Park is the most glorious tribute to preservation of flora and fauna the eastern suburbs can provide, excepting the Botanical Gardens.

I really haven't a bad word to say about the place...apart from the ever-increasing hordes that seem to be taking over. When I was younger, there was certainly little groups of families, couples, and singles dotted about the park, enjoying the warm air, the rolling grasslands, and the many little weird and wonderful stone statues throughout.  Now however, it seems like they file in like zombies, sprawling over the place, trampling the lushness beneath their feet.

Maybe I'm getting old, but I simply cannot recall this many yummy mummies jogging aggressively about, zipping between people out for a stroll like they're race markers. I've never seen so many tourists swarm the rose gardens, jostling to take photos of a single bloom. Not to be a hypocrite - as I'm the first to take instagram shots - but whatever happened to being in the moment?

That being said, you can still enjoy the parklands in a quiet wander, you just need to pick your times and spots. Lucky for us, Centennial is still enormous and more than able to take the crowds, hopefully for years to come.

5. Alexandria, from Botany Road to Green Square to the border of Redfern and Waterloo. This used to be an industrial backwater that you pitied the people who lived here for. In the last ten years however, Alexandria has grown like a wildflower and boasts some of the coolest cafes in the suburbs.

John Smith Cafe tucked off Botany Road, technically considered Waterloo and near the corner of McEvoy with the ever-present McDonalds, is run by a barista called Dan, who used to work at one of my old haunts in the city. He up and got himself some partners and his own place, doing gorgeous drip filter brews and seasonal nosh. Good stuff for the serious coffee snob and foodie.

Hardly anyone hasn't heard of the Alexandria Hotel. Situated on the corner of Henderson Road and Garden Street, and another technicality of "Eveleigh'', the Alex is looking to be pulled down and bulldozed into apartments. The Alex is one of the only places left in that area that has been standing for more than a century, a petition has been taken up to save it.

After changing hands a few years ago, the running has become somewhat haphazard; with new management using it to book out film crews for weeks at a time, and the rules about dogs, kids and dresswear becoming a little tighter. In the real world though, you have to make money to keep going, and you can't blame them for trying. Either way, it would a shame to see the old place go, and I for one hope it stays, if only to see what the next version of it brings along.

Lastly, Alexandria hosts ALL the good outlet shops; Cotton On, Seafolly, Roger David, and so on. It also has one of the largest Christmas outlets in the eastern suburbs, which may seem weird, but have you ever seen a giant blow up snow man that has a circle of fake snow constantly blowing around it? And matching blow up penguins? Trust me, for all you Christmas fanatics out there, it's worth the trip.

6. Last, but certainly not least on my little list; Rosebery. A strange little 'burb to be sure, it nestles between industrial Alexandria, the student-land of Kensington, industrial Botany, and the airport-adjacent Mascot.

Rosebery seems like the gateway suburb that North Sydney is, but without the skyscrapers. There seems very little do, lots of residential-ness without any glamour, and loads of sulky teenagers and mildly sinister types wandering between here and nearby Eastlakes.

To take it at first glance on that impression though would be a mistake. Much like Alexandria, Rosebery has a thriving cafe culture that grows every year.

The 5th Earl on Morley Avenue is run by a Greek family who have created something glorious in a little side street; classy, Louis XIV-style chairs and clean-line tables fill a plantation-style room, where the coffee is exceptional and the food top-notch. Open early enough that I can get my caffeine fix on the way to archery Sunday mornings, the staff (read=family) are always moving with efficiency and ready with a smile.

Rosebery is also a great place to park your car if you need to get to somewhere nearby; with enough street parking for both you and the residents, it means a nice, quiet stroll there, and a walk-the-pastries-off back to your car.

And just as an aside, if you're looking for cheap petrol on a weekend - swing through Rosebery, you won't be disappointed.

That's the short list. If I feel so motivated, I might get onto the longer list another time. It will probably be the location version of Snog/Marry/Avoid, so I'd psych yourselves up now... ;)